Are first babies more likely to be late, revisited.

Two years ago I wrote an article called Are first babies more likely to be late?, based on a question that came up when my wife and I were expecting our first child.  I compared the pool of first babies to the pool of all other babies, and found:

Then yesterday I got the following question from an Unknown correspondent:

While interesting, I can't help but think you need to compare the first and others for the same woman. While may be unlikely it could still be that a tendency exists for a woman's second, third, etc, child comes earlier.

So I ran that experiment, selecting all mothers with at least two children and computing the difference in pregnancy length between the second and first child (so a positive value means the second child was later).  Here is the distribution of these value for 4387 women in the NSFG (National Survey of Family Growth): 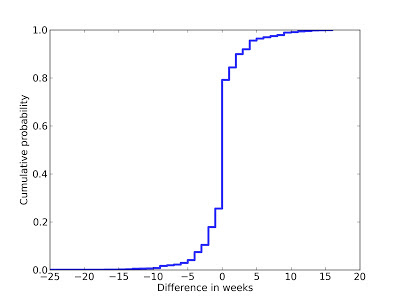 Visually the distribution looks symmetric, and the summary statistics support that conclusion.  The mean is -0.034, which means that (if anything) the second baby is born about 6 hours earlier, but this difference is not statistically significant.

Conclusion: good question, definitely worth running the experiment, but the primary result is the same as what we saw before: no significant difference in the means.