I've just added a new chapter to Think Bayes; it is a case study based on a class project two of my students worked on this semester.  It presents "The Red Line Problem," which is the problem of predicting the time until the next train arrives, based on the number of passengers on the platform.

In Boston, the Red Line is a subway that runs north-south from Cambridge to Boston.  When I was working in Cambridge I took the Red Line from Kendall Square to South Station and caught the commuter rail to Needham.  During rush hour Red Line trains run every 7--8 minutes, on average.

While I was waiting for trains, I thought about how Bayesian estimation could help predict my wait time and decide when I should give up and take a taxi.  This chapter presents the analysis I came up with.

Sadly, this problem has been overtaken by history: the Red Line now provides real-time estimates for the arrival of the next train.  But I think the analysis is interesting, and still applies for subway systems that don't provide estimates.

As it turns out, the average time between trains, as seen by a random passenger, is substantially higher than the true average.

In each case, values from the actual distribution are oversampled in proportion to their value. In the Red Line example, a gap that is twice as big is twice as likely to be observed.

The data for the Red Line are close to this example.  The actual time between trains is 7.6 minutes (based on 45 trains that arrived at Kendall square between 4pm and 6pm so far this week).  The average gap as seen by random passengers is 8.3 minutes.

Interestingly, the Red Line schedule reports that trains run every 9 minutes during peak times. This is close to the average seen by passengers, but higher than the true average. I wonder if they are deliberately reporting the mean as seen by passengers in order to forestall complaints.

You can read the rest of the chapter here.  One of the figures there didn't render very well.  Here is a prettier version: 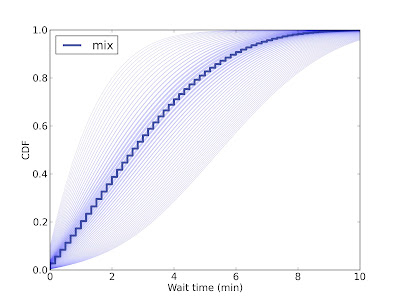 So in this scenario, you expect the next train in 5 minutes or less, with 80% confidence.

UPDATE 10 May 2013: I got the following note from developer@mbta.com, confirming that their reported gap between trains is deliberately conservative:

Thank you for writing to let us know about the Red Line case study in your book, and thank you for your question. You’re right that the scheduled time between trains listed on the subway schedule card for rush hour is greater than what you observed at Kendall Square. It’s meant as a slightly conservative simplification of the actual frequency of trains, which varies by time throughout rush hour – to provide maximum capacity during the very peak of rush hour when ridership is normally highest – as well as by location along the Red Line during those different times, since when trains begin to leave more frequently from Alewife it takes time for that frequency to “travel” down the line. So yes it is meant to be slightly conservative for that reason. We hope this information answers your question.