About a week ago I taught my tutorial, Bayesian Statistics Made Simple, at PyCon 2014 in Montreal.  My slides, the video, and all the code, are on this site.  The turnout was great.  We had a room full of enthusiastic Pythonistas who are now, if I was successful, enthusiastic Bayesians.

Toward the end, one of the participants asked a great question based on his work (if I understand the background correctly) at Do Something.org.  Here's my paraphrase:

At the tutorial I wasn't able to generate an answer on the fly, except to say

2) If we only know the number of people who sign up and the number or participants who report back, we won't be able to estimate q and r separately.  We'll be able to narrow the distribution of q, but not by much.

3) But if we can do additional sampling, we should be able to make a good estimate.  For example, we could choose a random subset of people who sign up and ask them whether they participated (and check whether they reported back).

With these two kinds of data, we can solve the problem using the same tools we used in the tutorial for the Dice and the Euro problems.  I wrote a solution and checked it into the repository I used for the tutorial.  You can read and download it here.

Here's the code that creates the suite of hypotheses:

probs is a sequence of 101 values equally-spaced between 0 and 1.  hypos is a list of tuples where each tuple represents a hypothetical pair, (q, r).

def Likelihood(self, data, hypo):
"""Computes the likelihood of the data.

For this problem, we do two kinds of update, depending on the data.  The first update takes a pair of values, (signed_up, reported), which are the number of people who signed up and the number that reported back:

def Likelihood1(self, data, hypo):
"""Computes the likelihood of the data.

Given the hypothetical values of q and r, we can compute p, which is the probability that someone who signs up will participate and report back.  Then we compute the likelihood using the binomial PMF (well, almost: I didn't bother to computer the binomial coefficient because it drops out, anyway, when we renormalize).

Since I don't have any real data, I'll makes some up for this example.  Suppose 140 people sign up and only 50 report back:

MarginalDistribution loops through the Suite and makes a new Pmf that represents the posterior distribution of either q (when index=0) or r (when index=1).  Here's what they look like: 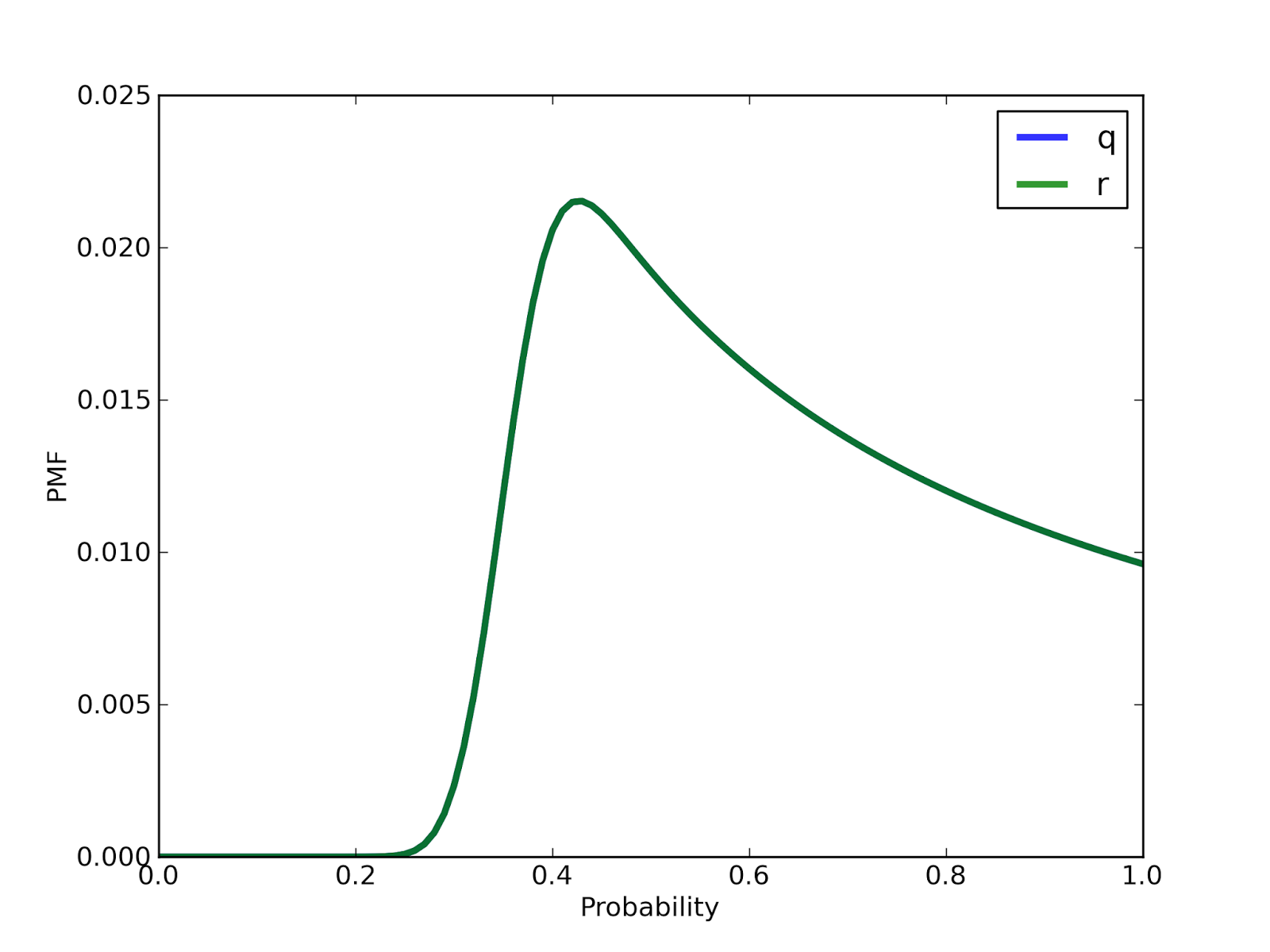 The two distributions are identical, which makes sense because this dataset doesn't give us any information about q and r separately, only about their product.

To estimate them separately, we need to sample people who sign up to see if they participated.  Here's what the second Likelihood function looks like:

def Likelihood2(self, data, hypo):
"""Computes the likelihood of the data.

Again, I don't have real data, but suppose we survey 5 people who signed up, and learn that 3 participated and 1 reported back.  We would do this update: 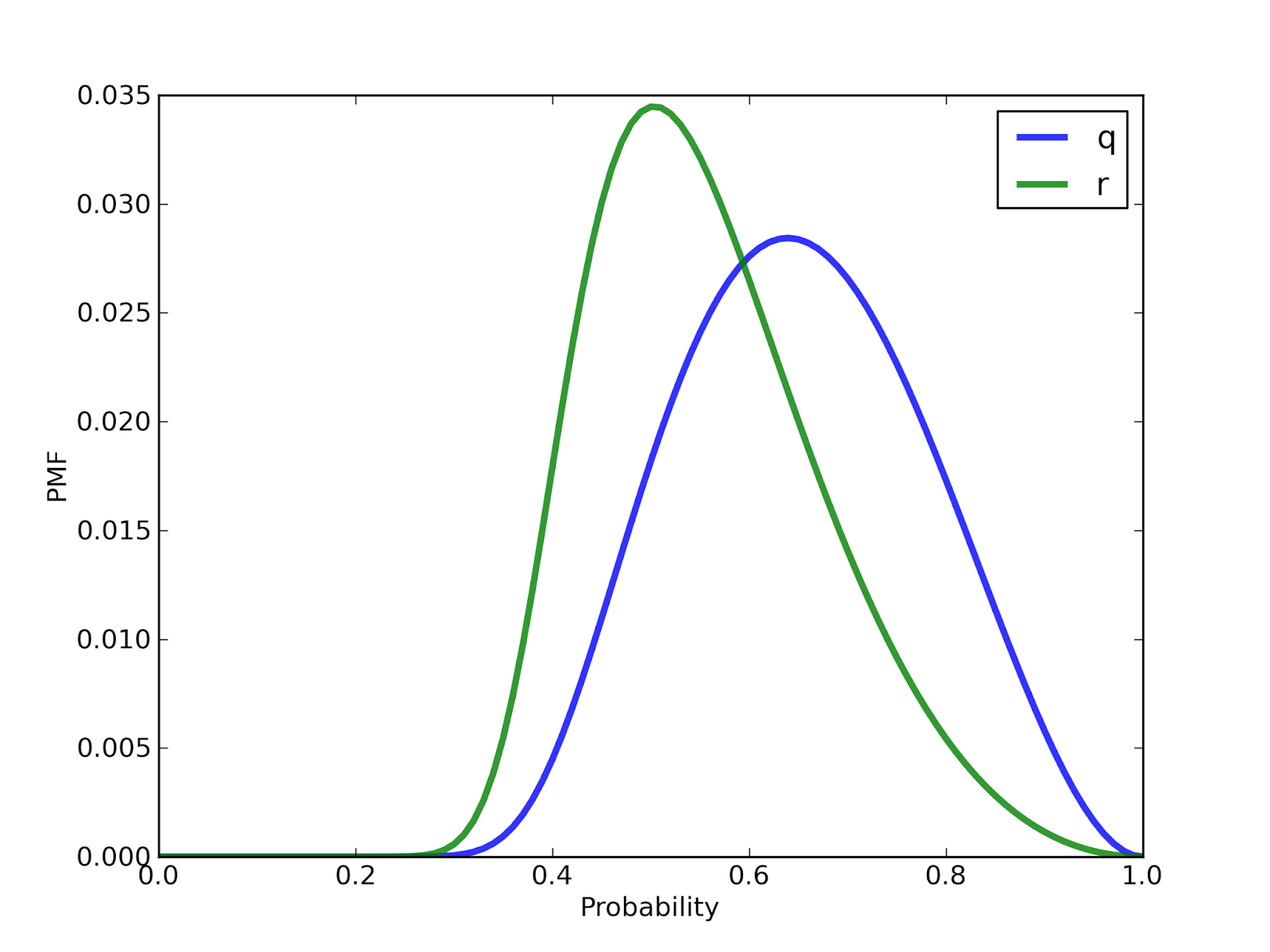 Now we can discriminate between q and r.  Based on my imaginary data, we would estimate that more than 60% of the people who signed up participated, but only 50% of them reported back.  Or (more usefully) we could use the posterior distribution of q to form a most likely estimate and credible interval for the number of participants.

This example demonstrates some features we didn't see during the tutorial:

1) The framework I presented extends naturally to handle multi-dimensional estimation.

2) It also handles the case where you want to update the same distribution with different kinds of data.

Many thanks to everyone who participated in the tutorial this year, and especially to the participant who asked about this problem.  Let me know if there are questions and I will update this post.

And if you want to learn more about Bayesian statistics, allow me to recommend Think Bayes.
Posted by Allen Downey at 5:14 AM