I recently watched a video of Jake VanderPlas explaining Bayesian statistics at SciPy 2014.  It's an excellent talk that includes some nice examples.  In fact, it looks like he had even more examples he didn't have time to present.

But as I argued in my recent talk, "Learning to Love Bayesian Statistics," frequentist methods generate point estimates and confidence intervals, whereas Bayesian methods produce posterior distributions.  That's two different kinds of things (different types, in programmer-speak) so they can't be equivalent.

If you reduce the Bayesian posterior to a point estimate and an interval, you can compare Bayesian and frequentist results, but in doing so you discard useful information and lose what I think is the most important advantage of Bayesian methods: the ability to use posterior distributions as inputs to other analyses and decision-making processes.

The next section of Jake's talk demonstrates this point nicely.  He presents the "Bayesian Billiards Problem", which Bayes wrote about in 1763.  Jake presents a version of the problem from this paper by Sean Eddy, which I'll quote:


"Alice and Bob are playing a game in which the first person to get 6 points wins. The way each point is decided is a little strange. The Casino has a pool table that Alice and Bob can't see. Before the game begins, the Casino rolls an initial ball onto the table, which comes to rest at a completely random position, which the Casino marks. Then, each point is decided by the Casino rolling another ball onto the table randomly. If it comes to rest to the left of the initial mark, Alice wins the point; to the right of the mark, Bob wins the point. The Casino reveals nothing to Alice and Bob except who won each point.

"Clearly, the probability that Alice wins a point is the fraction of the table to the left of the mark—call this probability p; and Bob's probability of winning a point is 1 - p. Because the Casino rolled the initial ball to a random position, before any points were decided every value of p was equally probable. The mark is only set once per game, so p is the same for every point.

"Imagine Alice is already winning 5 points to 3, and now she bets Bob that she's going to win. What are fair betting odds for Alice to offer Bob? That is, what is the expected probability that Alice will win?"

Eddy solves the problem using a Beta distribution to estimate p, then integrates over the posterior distribution of p to get the probability that Bob wins.  If you like that approach, you can read Eddy's paper.  If you prefer a computational approach, read on!  My solution is in this Python file.

The problem statement indicates that the prior distribution of p is uniform from 0 to 1.  Given a hypothetical value of p and the observed number of wins and losses, we can compute the likelihood of the data under each hypothesis:

Billiards inherits the Update function from Suite (which is defined in thinkbayes.py and explained in Think Bayes) and provides Likelihood, which uses the binomial formula:

I left out the first term, the binomial coefficient, because it doesn't depend on p, so it would just get normalized away.

Now I just have to create the prior and update it: 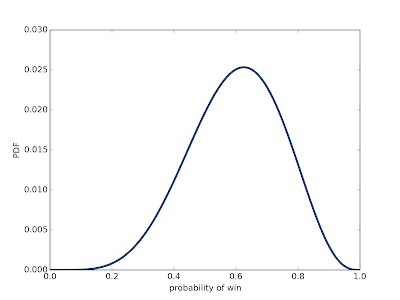 We don't know the value of p, but we have its posterior distribution, which we can "integrate over" like this:

Using a frequentist approach, we get a substantially different answer.  Instead of a posterior distribution, we get a single point estimate.  Assuming we use the MLE, we estimate p = 5/8, and (1-p)³ = 0.056, which corresponds to 18:1 odds against.

Needless to say, the Bayesian result is right and the frequentist result is wrong.

As I said at the Open Data Science Conference: 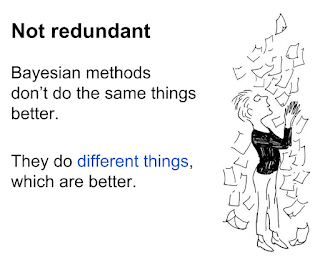 [UPDATE June 26, 2015]  Some readers have objected that this article is unfair, because any competent statistician would know that the frequentist method I presented here would behave badly, and even a classical statistician could happily use Bayes's theorem to solve this problem, because the prior is provided by the problem statement.

A few thoughts in response:

1) This article compares a Bayesian method and frequentist method.  I never said anything about Bayesians and frequentists as people, or about what methods a hypothetical statistician might choose.

3) Maybe it's true that a competent statistician would expect the frequentist approach to perform badly for this problem, but it still seems like that is a disadvantage of the frequentist approach.  I would rather have a method that is always right than a method that sometimes works and sometimes fails, and requires substantial expertise to know when to expect which.