Updated results from the CIRP Freshman Survey were published last week, which means it's time for me to update to my annual series on the increasing number of college students with no religious affiliation (the "nones").

Since I started following this trend it 2008, I have called it "one of the most under-reported stories of the decade". I'm not sure if that's true any more; there have been more stories recently about secularization in the U.S., and the general disengagement of Millennials from organized religion.

But one part of the story continues to surprise me: the speed of the transformation is remarkable, averaging almost 1 percentage point per year for the last 20 years, and there is increasing evidence that it is accelerating.

Among first-year college students in Fall 2015, the fraction reporting no religious affiliation reached an all-time high of 29.6%, up more than 2 percentage points from 27.5% last year.

And the fraction reporting that they never attended a religious service also reached an all-time high at 30.5%, up from 29.3% last year.

These reports are based on survey results from the Cooperative Institutional Research Program (CIRP) of the Higher Education Research Insitute (HERI).  In 2015, more than 141,000 full-time, first-time college students at 199 colleges and universities completed the CIRP Freshman Survey, which includes questions about students’ backgrounds, activities, and attitudes.

The following figure shows the fraction of Nones over more than 40 years of the survey. 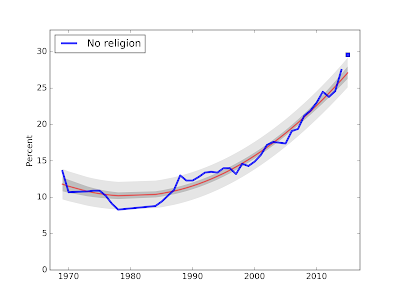 The blue line shows actual data through 2014; the red line shows a quadratic fit to the data.  The dark gray region shows a 90% confidence interval, which represents uncertainty about the parameters of the model.  The light gray region shows a 90% predictive interval, which represents uncertainty about the predicted value.

The blue square shows the actual data point for 2015.  For the first time since I starting running this analysis, the new data point falls outside the predicted interval.

30% have not attended a religious service

Here is the corresponding plot for attendance at religious services. 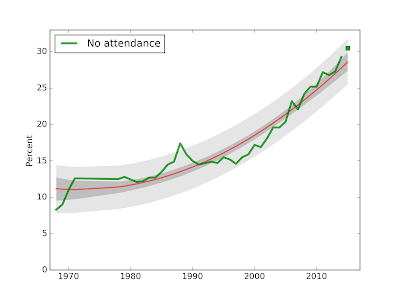 The new data point for 2015, at 30.5%, falls in the predicted range, although somewhat ahead of the long term trend.

The trend is accelerating

The quadratic model suggests that the trend is accelerating, but for a clearer test, I plotted annual changes from 1985 to the present: 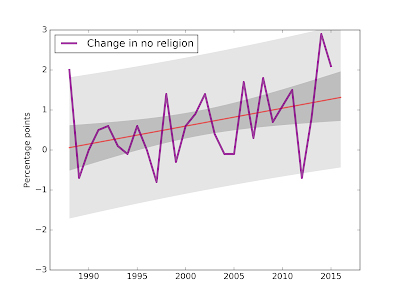 Visually, it looks like the annual changes are getting bigger, and the slope of the fitted line is about 0.4 percentage points per decade.  The p-value of that slope is 3.6%, which is considered statistically significant, but barely.  You can interpret that as you like.


As always, more males than females report no religious preference. 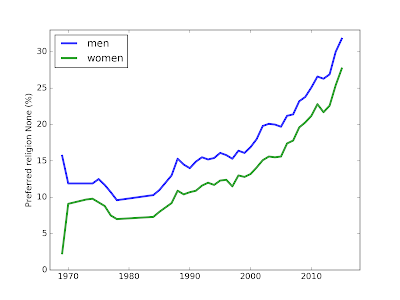 The gender gap closed slightly this year, but the long term trend suggests it is still growing. 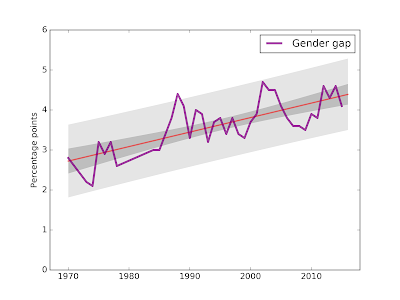 Using the new 2015 data, we can run the same analysis to generate predictions for 2016.  Here is the revised plot for "Nones": 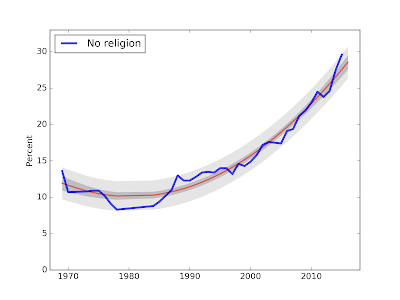 This year's measurement is ahead of the long-term trend, so next year's is predicted to regress to 28.6% (down 1.0%). 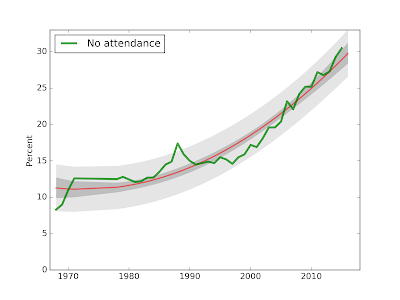 Again, because this year's value is ahead of the long term trend, the center of the predictive distribution is lower, at 29.8% (down 0.7%).

I'll be back next year to check on these predictions.

2) The number of schools and the number of students participating in the Freshman Survey has been falling for several years.  I wonder if the mix of schools represented in the survey is changing over time, and what effect this might have on the trends I am watching.  The percentage of "Nones" is different across different kinds of institutions (colleges, universities, public, private, etc.)  If participation rates are changing among these groups, that would affect the results.

This and all previous reports are available from the HERI publications page.
Posted by Allen Downey at 10:38 AM