Millennials are still not getting married

Last year I presented a paper called "Will Millennials Ever Get Married?" at SciPy 2015.  You can see video of the talk and download the paper here.

I used data from the National Survey of Family Growth (NSFG) to estimate the age at first marriage for women in the U.S., broken down by decade of birth.  I found evidence that women born in the 1980s and 90s were getting married later than previous cohorts, and I generated projections that suggest they are on track to stay unmarried at substantially higher rates.

Yesterday the National Center for Health Statistics (NCHS) released a new batch of data from surveys conducted in 2013-2015.  I downloaded it and updated my analysis.  Also, for the first time, I apply the analysis to the data from male respondents.

Based on a sample of 58488 women in the U.S., here are survival curves that estimate the fraction who have never been married for each birth group (women born in the 1940s, 50s, etc) at each age. 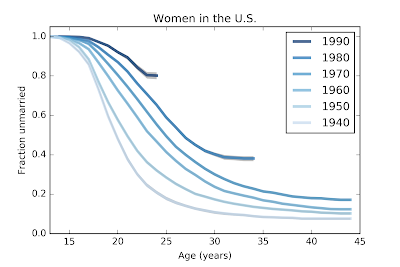 For example, the top line represents women born in the 1990s.  At age 15, none of them were married; at age 24, 81% of them are still unmarried.  (The survey data runs up to 2015, so the oldest respondents in this group were interviewed at age 25, but the last year contains only partial data, so the survival curve is cut off at age 24).

By making some simple projections, we can estimate the magnitude of these effects separately.  I explain the methodology in the paper.  The following figure shows the survival curves from the previous figure as well as projections shown in gray: 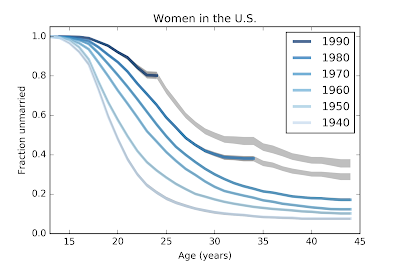 The following figure summarizes these results by taking vertical slices through the survival curves at ages 23, 33 and 43. 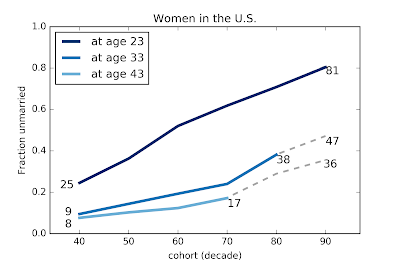 In this figure the x-axis is birth cohort and the y-axis is the fraction who have never married.

These projections are based on simple assumptions, so we should not treat them as precise predictions, but they are not as naive as a simple straight-line extrapolations of past trends.

The results for men are similar but less extreme.  Here are the estimated survival curves based on a sample of 24652 men in the U.S.  The gray areas show 90% confidence intervals for the estimates due to sampling error. 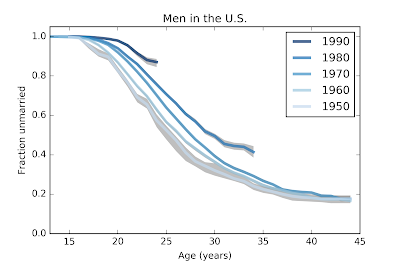 And projections for the last two cohorts. 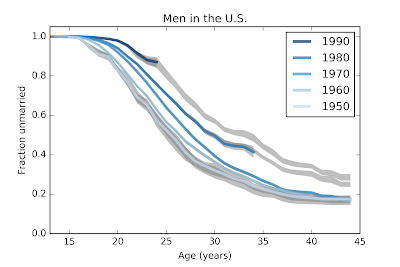 Finally, here are the same data plotted with birth cohort on the x-axis. 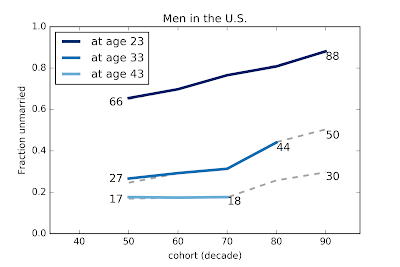 1) If people in the last two cohorts are postponing marriage, we might expect their marriage rates to increase or decrease more slowly.

2) If we extrapolate the trends, we might expect marriage rates to continue to fall or fall faster.

I used an alternative between these extremes: I assume that the hazard function from the previous generation will apply to the next.  This takes into account the possibility of delayed marriage (since there are more unmarried people "at risk" in the projections), but it also assumes a degree of regression to past norms.  In that sense, the projections are probably conservative; that is, they probably underestimate how different the last two cohorts will be from their predecessors.

All the details are in this Jupyter notebook.
Posted by Allen Downey at 8:43 AM