My run to the polls

Today I left work around 11am, ran 2.5 miles from Olin College to Needham High School, voted, and ran back, all in less than an hour.  It was all very pleasant, but I am acutely aware of how lucky I am:


And I could go on.  When I got back, I posted this tweet, which prompted the replies below: 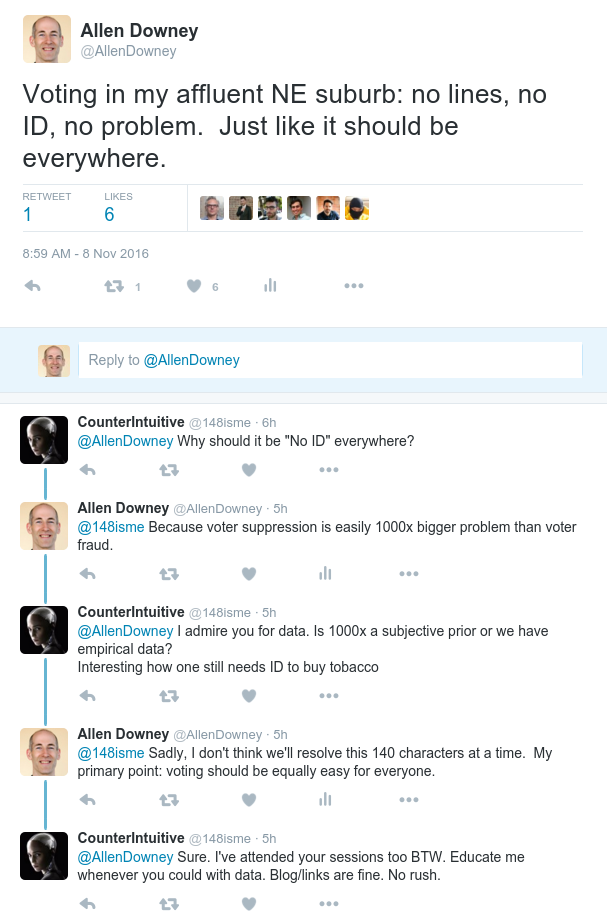 As I said, my primary point is that voting should be equally easy for everyone; I didn't really intend to get into the voter ID debate.  But the challenge my correspondent raised is legitimate.  I posited a number, and I should be able to back it up with data.

So let me see if I can defend my claim that voter suppression is a 1000x bigger problem than voter fraud.

According to the ACLU, there are 21 million US citizens who don't have government-issued photo ID.  They reference "research" but don't actually provide a citation.  So that's not ideal, but even if they are off by a factor of 2, we are talking about 10 million people.

Presumably some of them are not eligible voters.   And some of them, who live in states that don't require voter ID, would get one if they needed it to vote.  But even if we assume that 90% of them live in states that don't require ID, and all of them would get ID if required, we are still talking about 1 million people who would be prevented from voting because they don't have ID.

So I am pretty comfortable with the conclusion that the number of people whose vote would be suppressed by voter ID laws is in the millions.

Now, how many people commit election fraud that would be prevented by voter ID laws?  This Wall Street Journal article cites research that counts people convicted of voter fraud, which seems to be on the order of hundreds per election at most.  Even if we assume that only 10% of perpetrators are caught and convicted, the total number of cases is only in the thousands.

Is that reasonable?  Should we expect there to be more?  I don't think so.  Impersonating a voter in order to cast an illegal ballot is probably very rare, for a good reason: it is a risky strategy that is vanishingly unlikely to be effective.  And in a presidential election, with a winner-takes-all electoral college, the marginal benefit of a few extra votes is remarkably close to nil.

So I would not expect many individuals to attempt voter fraud.  Also, organizing large scale voter impersonation would be difficult or impossible, and as far as I know, no one has tried in a recent presidential election.

But what about bias?

Let me add one more point: even if the ratio were smaller, I would still be more concerned about voter suppression, because:
And as any statistician will tell you, I'll take noise over bias any day, and especially on election day.