On these previous post about my favorite Bayes theorem problems, I got the following comment from a reader named Riya:


I think this is an excellent question, so I am passing it along to the readers of this blog.  One suggestion: you might want to use my world famous Bayesian update worksheet.

Hint: This question is similar to one I wrote about last year.  In that article, I started with a problem that was underspecified; it took a while for me to realize that there were several ways to formulate the problem, with different answers.

Fortunately, the problem posed by Riya is completely specified; it is an example of what I called Scenario A, where there are two tests with different properties, and we don't know which test was used.

There are several ways to proceed, but I recommend writing four hypotheses that specify the test and the status of the patient:

For each of these hypotheses, it is straightforward to compute the prior probability and the likelihood of a positive test.  From there, it's just arithmetic.

Here's what it looks like using my world famous Bayesian update worksheet: 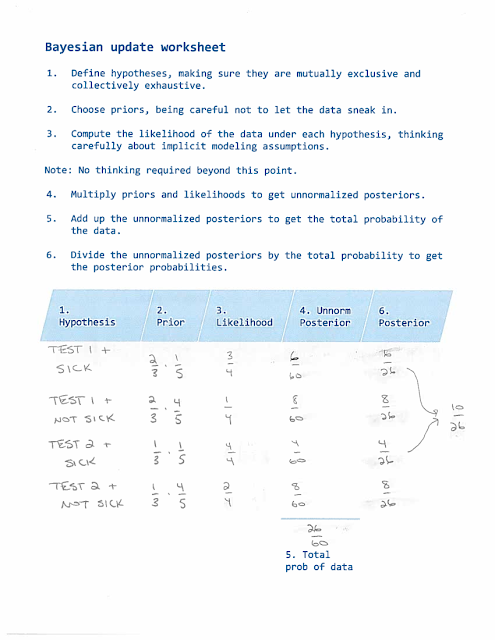 (Now with more smudges because I had an arithmetic error the first time.  Thanks, Ben Torvaney, for pointing it out.)

Interestingly, the total posterior probability of TEST2 is 12/26 or about 46%.  That's up from the prior, which was 33%.  So the positive test provides some evidence that TEST2 was used.