[This is an update of an article I wrote last year, "Freshman hordes more godless than ever."  There is a followup to this article here.]

For several years I have been following one of the most under-reported stories of the decade: the fraction of college freshmen who report no religious preference has more than tripled since 1985, from 8% to 25%, and the trend is accelerating.

Similarly, students reporting that in the last year they have never attended a religious service has grown from 8% to more than 27%.

My analysis is based on survey results from the Cooperative Institutional Research Program (CIRP) of the Higher Education Research Insitute (HERI).  In 2011, more than 200,000 students at 270 colleges and universities completed the CIRP Freshman Survey, which includes questions about students’ backgrounds, activities, and attitudes.


In one question, students select their “current religious preference,” from a choice of seventeen common religions, “Other religion,” or “None.”


Another question asks students how often they “attended a religious service” in the last year. The choices are “Frequently,” “Occasionally,” and “Not at all.” Students are instructed to select “Occasionally” if they attended one or more times.
This figure shows students' responses over the history of the survey: 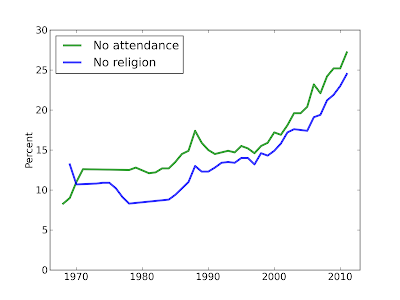 It's clear that both measurements are increasing, and it looks like they might be accelerating.  To make that more precise, I fit a parabola to each curve.  This figure shows the data for "No religion" and a least squares fit: 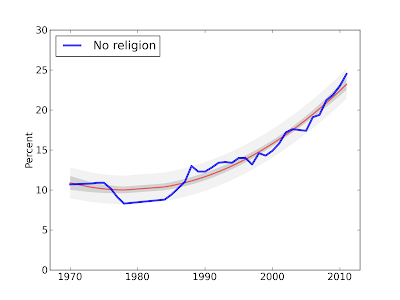 
Similarly, here is the data for "No attendance" and a least squares fit: 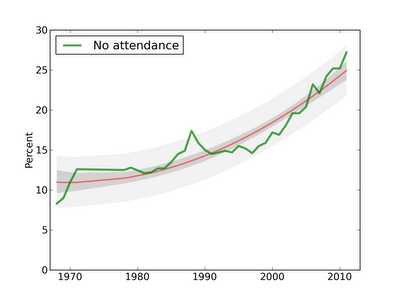 R² for this model is 0.89, and again the p-values are effectively 0. [Note for stats geeks: as it happens, the coefficient of the linear term is close to zero, so it is not statistically significant.  My first thought was to remove it from the model, but if I did that, I would understate the sampling error of the model.  In this case, it is correct to keep an "insignificant" variable in the model; the fact that it is near zero doesn't mean we can ignore it, or the error associated with it.]


To test more explicitly whether the growth is accelerating, I computed the change from one year to the next in percentage points.  The following figure shows these changes and a least squares fit: 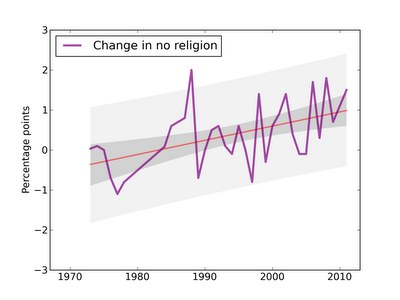 Subtraction amplifies noise, so for this model R² is only 0.24, but the p-value of the slope is 0.002, so this data provides strong evidence of acceleration.  The slope is 0.035 percentage points per year.


Based on this model, the predicted change for next year is 1 percentage point, so we expect the fraction of freshmen reporting no religious preference to be 26%.


Since the beginning of the CIRP survey, more men than women have reported no religious preference: 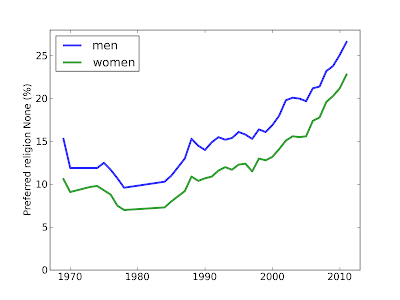 And the gender gap seems to be growing.  Here is the difference between men and women, in percentage points, and a least squares fit: 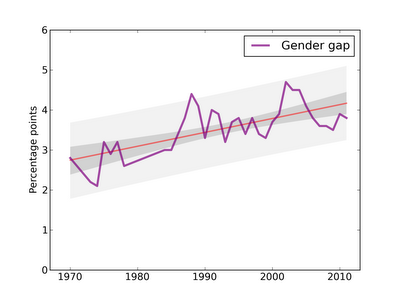 I first wrote about this in 2007, in this article for Free Inquiry magazine.  There I wrote:

College students are hardly a random sample of the population. People with more education are less likely to believe in heaven, the devil, miracles, and the literal truth of the Christian Bible. However, contrary to many people’s expectations, educated people are more likely to attend services. So, we expect the students in this sample to be less believing than the general population but also more observant.

There is reason to think that the rate of secularization in the general population is faster than what we see in this sample. Over the lifetime of the CIRP survey, college education has democratized; the percentage of high-school graduates who enter college immediately after graduation has increased from roughly 50 percent in 1970 to 65 percent in 2003. Over this time, CIRP has included more poor students, more racial minorities, and more students from families with less education. These groups tend to be more religious than the general population, so we expect their participation to increase the religiosity in the sample. Thus, the observed decrease probably underestimates the trend in the general population.

The theory of secularization—that there is a global, long-term trend away from religion—is controversial. Early sociologists, notably Max Weber, hypothesized that secularization is a predictable effect of rationalization—the increasing tendency for social actions to be based on reason rather than emotion or tradition.

In the 1950s and 1960s, many sociologists of religion defended strong theories of secularization, but, since then, several of them—including Peter Berger and Harvey Cox—have reversed their positions, arguing that religion is resurging in some areas, including the United States.

The data presented here speak directly to this debate. The CIRP survey has posed almost the same questions to a large sample of a consistently defined group for almost forty years, and the results show a clear and consistent trend away from both identification with religious sects and participation in religious services. These data make a strong case for secularization in the United States that has, if anything, accelerated in the last decade.


This and all previous reports are available from the HERI publications page.