In Part Four I looked at changes in religiosity over the lifetime of respondents.  The GSS is not a longitudinal survey, so we can't follow individuals, but we can follow generations (which I partition by decade of birth) over time.

Last time I presented this figure, which shows religiosity (the fraction of respondents with any religious preference) as a function of respondent's age, partitioned by decade of birth, for people who were raised Protestant: 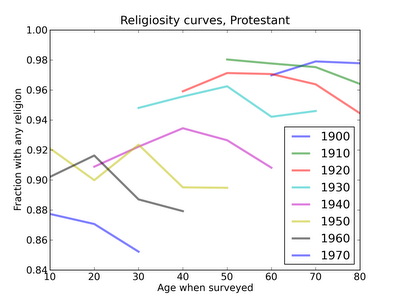 The conclusion I drew from this figure is that the differences between generations are larger than the changes, over time, within each generation.  For purposes of modeling I concluded that religious disaffiliation accounts for only a small part of the observed changes in religious identity.

But I was bothered by one feature of these curves: many of them are concave down, and the maximum point in the curves is apparently shifting toward younger ages.  I came to suspect that this picture of the data is "out of focus".

We can refocus the image by plotting the date of the survey (rather than the respondent's age) on the x-axis.  Here's what that looks like: 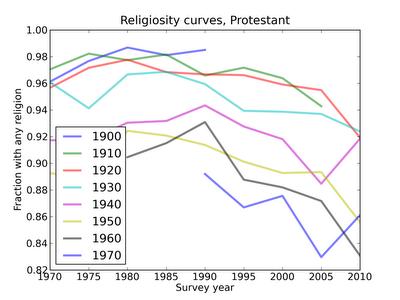 We can see these changes more clearly by normalizing each curve with its 1990 value: 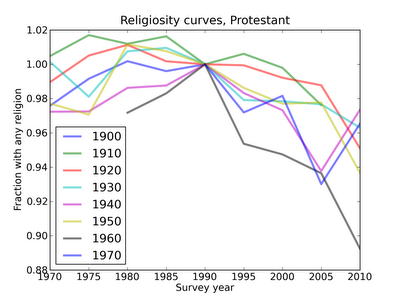 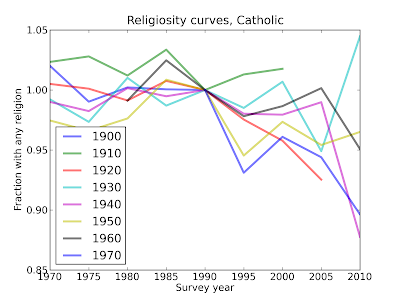 The general shape is the same: religious affiliation was flat or increasing prior to 1990, and decreasing for almost all generations after 1990.

Since the trends are similar for Catholics and Protestants, we can get a less noisy picture by combining them.  Here is the same graph for respondents raised with any religion. 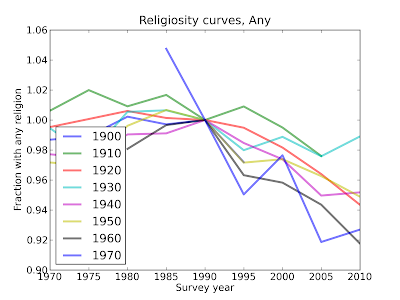 This figures makes it easier to compare across generations.  It appears that more recent generations (born in the 1960s and 1970s) are disaffiliating at higher rates than earlier generations.
[As an aside, this result contradicts one of the primary (and widely-reported) claims of this article: Schwadel, Period and Cohort Effects on Religious Nonaffiliation and Religious Disaffiliation.  Schwadel reports that people born in the 1960s and 1970s were disaffiliating at a slower rate than the previous generations.  Some reasons my results might be different: Schwadel only had GSS data up to 2006, and he discards people under 30 years of age.  So very little data about the youngest generations is included.  Also, his results are based on statistical models that (if I understand correctly) don't include time as an explanatory variable, so they cannot account for an event that affects all generations during a particular interval.]

All right, it's audience participation time.  What happened in the 1990s that caused widespread religious disaffiliation?  Remember, idle speculations only.  No evidence, please!