Secularization in America, part one.

In the last year or so I have written several articles about trends in religion among college students:


All of these are based on data from the Cooperative Institutional Research Program (CIRP) which runs the Freshman Survey, an annual survey of more than 200,000 incoming students at 270 colleges and universities in the U.S.

More recently, I read Secularization: In Defence of an Unfashionable Theory, by Steve Bruce.  Bruce presents the "unfashionable theory" that as societies modernize, they secularize.  In his formulation, modernization includes trends toward individualism, industrial capitalism, science and technology; and secularization means "decline in the social significance of religion."

The poster child for secularization is Western Europe, where the social influence of religion has been in decline for centuries, and where in every country the fraction of people with no religious affiliation has been increasing for decades.

The data from the Freshman Survey are consistent with secularization.  The number of incoming college students with no religious affiliation has been climbing consistently since 1978, and the number of students reporting participation in religious service has fallen at about the same rate.

Of course, college students are not a random sample of the population; for that, we can use data from the General Social Survey (GSS), which is (according to the GSS) "widely regarded as the single best source of data on societal trends."  It has run since 1972; each year (or every other year since 1994) it surveys a sample of about 2000 adults randomly sampled from the U.S. population.  Respondents answer hundreds of questions about their background, life history, and beliefs.  Many questions are repeated from year to year for trend analysis.

I will use this dataset to answer several questions:
To get started, I tracked responses to the question, "What is your current religious preference?"  The original set of options was Protestant, Catholic, Jewish, some other religion, or no religion.  After 1994, the set of options was expanded, but for my purposes the original options are enough to describe large-scale trends.  The following graph shows the fraction of the population in each group over time. 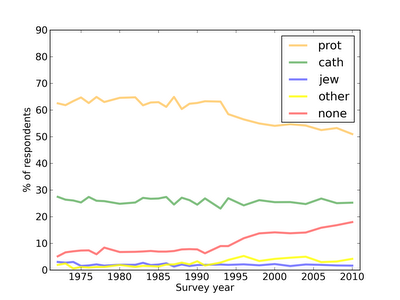 A few trends are apparent: the percentage of Protestants is declining; the percentages of Other and None are increasing.  These trends are clearer in the following figures, broken into two intervals: 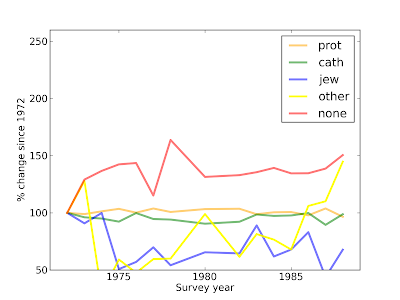 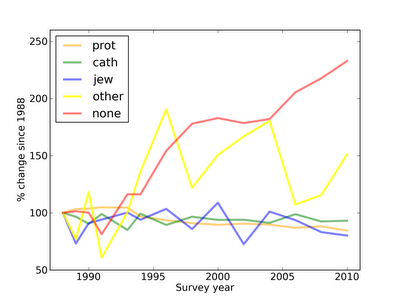 This dataset shows signs of secularization in the U.S., at least since 1972.  But religious affiliation is just one aspect of religious identity; there is a lot more data in the GSS to look at.

My particular interest is in explaining the trends we have seen so far, and predicting what's coming next.  It is tempting to think that something happened in 1988 to cause the inflections in these curves, but I think it is more likely that the origin of these changes goes back farther.

To test that idea, let's pretend that it's 1988.  We have see some changes in the market share of different religions since 1972, but nothing bigger than a few percentage points, and no indication of acceleration.  Could we have predicted the much larger changes coming between 1988 and 2010?

In the next few articles, I develop several models intended to answer that question.  Then I turn to prediction: using the data up to 2010 (and 2012 when it is available) what can we expect in the next 20 years?