This article is an excerpt from Think Bayes, a book I am working on.  The entire current draft is available from http://thinkbayes.com.  I welcome comments and suggestions.

In the previous article, I described presented The Price is Right problem and a Bayesian approach to estimating the value of a showcase of prizes.  This article picks up from there...

Now that we have a posterior distribution, we can use it to compute the optimal bid, which I define as the bid that maximizes expected gain.

To compute optimal bids, I wrote a class called GainCalculator:

player and opponent are Player objects.

GainCalculator provides ExpectedGains, which computes a sequence of bids and the expected gain for each bid:

low and high specify the range of possible bids; n is the number of bids to try. Here is the function that computes expected gain for a given bid:

ExpectedGain loops through the values in the posterior and computes the gain for each bid, given the actual prices of the showcase. It weights each gain with the corresponding probability and returns the total.

Gain takes a bid and an actual price and returns the expected gain:

If you overbid, you get nothing. Otherwise we compute the difference between your bid and the price, which determines your probability of winning.

If diff is less than $250, you win both showcases. For simplicity, I assume that both showcases have the same price. Since this outcome is rare, it doesn’t make much difference.

Finally, we have to compute the probability of winning based on diff:

If your opponent overbids, you win. Otherwise, you have to hope that your opponent is off by more than diff. Player provides methods to compute both probabilities:

Given a guess and an opponent, OptimalBid computes the posterior distribution, instantiates a GainCalculator, computes expected gains for a range of bids and returns the optimal bid and expected gain. Whew! 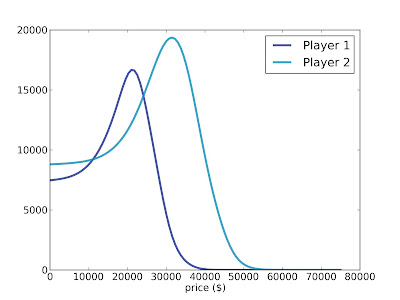 One of the most useful features of Bayesian estimation is that the result comes in the form of a posterior distribution. Classical estimation usually generates a single point estimate or a confidence interval, which is sufficient if estimation is the last step in the process, but if you want to use an estimate as an input to a subsequent analysis, point estimates and intervals are often not much help.

In this example, the Bayesian analysis yields a posterior distribution we can use to compute an optimal bid. The gain function is asymmetric and discontinuous (if you overbid, you lose), so it would be hard to solve this problem analytically. But it is relatively simple to do computationally.

Newcomers to Bayesian thinking are often tempted to summarize the posterior distribution by computing the mean or the maximum likelihood estimate. These summaries can be useful, but if that’s all you need, then you probably don’t need Bayesian methods in the first place.

Bayesian methods are most useful when you can carry the posterior distribution into the next step of the process to perform some kind of optimization, as we did in this chapter, or some kind of prediction, as we will see in the next chapter [which you can read here].
Posted by Allen Downey at 6:49 AM