Freshman hordes regress to the mean

For several years I have been following one of the most under-reported stories of the decade: the fraction of college freshmen who report no religious preference has tripled since 1985, from 8% to 24%, and the trend is accelerating.

In last year's installment, I made the bold prediction that the trend would continue, and that the students starting college in 2012 would again, be the most godless ever.  It turns out I was wrong: attendance went up slightly, and the fraction of "Nones" dropped slightly, in both cases reverting toward long-term trends.

My analysis is based on survey results from the Cooperative Institutional Research Program (CIRP) of the Higher Education Research Insitute (HERI).  In 2012, more than 190,000 students at 283 colleges and universities completed the CIRP Freshman Survey, which includes questions about students’ backgrounds, activities, and attitudes.

The following figure shows the fraction of Nones over more than 40 years of the survey: 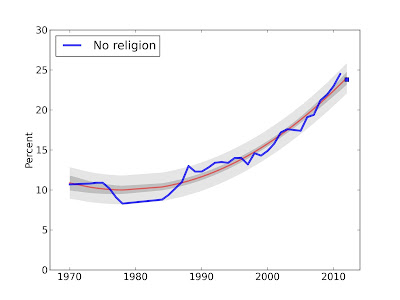 The blue line shows actual data through 2011; the red line shows a quadratic fit to the data.  The dark gray region shows a 90% confidence interval, taking into account sampling error, so it reflects uncertainty about the parameters of the fit.

We expect the new data point from 2012, shown as a blue square, to fall within the light gray interval, and it does.  In fact, at 23.8% it falls almost exactly on the fitted curve. 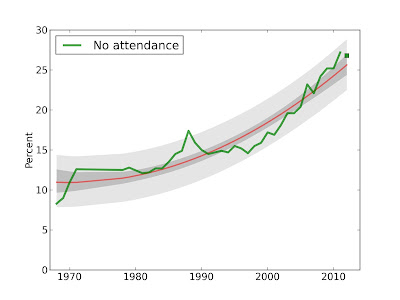 Again, the new data point for 2012, 26.8%,  falls comfortably in the predicted range.  Don't listen to Nate Silver; prediction is easy :) 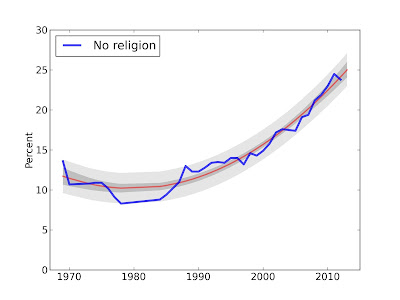 The prediction for next year is that the fraction of Nones will hit a new all-time high at 25% (up from 23.8%). 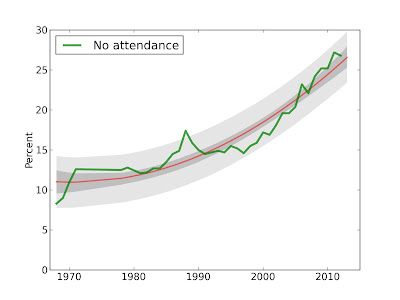 2) As always, more males than females report no religious preference.  The gender gap increased this year, but still falls in the predicted range, as shown in the following plot: 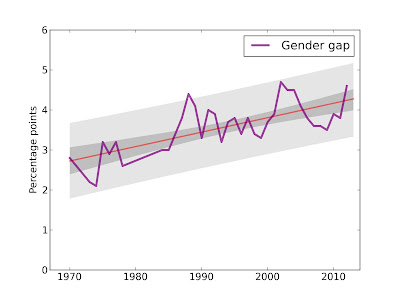 Evidence that the gender gap is increasing is strong.  The p-value of the slope of the fitted curve is less than 10e-5.


This and all previous reports are available from the HERI publications page.
Posted by Allen Downey at 10:53 AM