Millennials are less likely to divorce

Millennials are getting married later than previous generations, as I wrote about here.  But the ones who get married are no more likely to divorce during the first 10 years, and after that they might be substantially less likely to get divorced.

The following figure shows estimates for the fraction of people who have not divorced as a function of years of marriage, broken down by decade of birth (click for a larger version).  These comparisons control for age at first marriage. 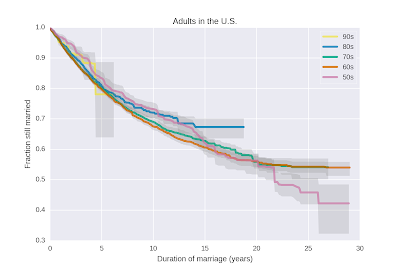 During the first 7 years, all cohorts divorced at about the same rate, as indicated by the overlapping 90% confidence intervals, shown in gray.

After that, there are two apparent differences among the cohorts:

As explained below, this analysis is likely to overestimate the divorce rate in the 80s cohort.  The right tail of this curve oversamples older people who married young, and this group has higher divorce rates.  As time passes and we get more data, the effect of this bias will diminish, and more accurate estimates are likely to show a bigger difference between Millennials and previous generations.

The details of this analysis are in this Jupyter notebook.

This analysis is based on data from the National Survey of Family Growth (NSFG).  From the most recent cycles of this survey, I selected 14513 women and 7028 men who have been married at least once.  I divided them into cohorts by decade of birth.

For each respondent, I selected variables to indicate the duration of the marriage at the time of interview and, for marriages that ended, the reason it ended and the duration (mar1diss and marend01)

Among women, we observed 4317 first marriages that ended in divorce and 10196 marriages that were intact at time of interview or ended in death.  Among men, we observed 1920 divorces and 5108 intact marriages.  I did separate analysis for men and women, but since the patterns in the two groups are basically the same, I combined them (after all, the two groups are samples from the same population of marriages, with some fuzziness at the boundaries of the cohorts due to differences in age at first marriage between men and women).

To estimate confidence intervals, I use a bootstrap method, drawing random samples from the set of respondents with replacement, using the sample weights provided by the NSFG (some groups are deliberately oversampled, so respondents in those groups have lower sample weights).

To control for age at first marriage, I choose a random sample from each cohort in order to match the distribution of age at first marriage in the 80s cohort.  This is a form of propensity matching, which I wrote about here.  This process has the side-effect of reducing the sample size in later cohorts, so the confidence intervals are probably bigger than necessary.

Even after controlling for age at first marriage, there is still a bias built into the estimation process for the survival curves (Kaplan-Meier estimation, which I wrote about here).  As we move to the right, toward longer marriage durations, we are necessarily dropping respondents who married late and oversampling respondents who married young.  This effect is strongest for the 80s cohort.

What effect does this bias have on the results?  In the 80s cohort, people who get married before age 21 are substantially more likely to divorce than people who marry later.  Since the right tail of the survival curve oversamples people who marry early, it probably overestimates the divorce rate.

As time passes and the sample includes more people who married late, we expect the estimated divorce rate in the 80s cohort to drop, which means that the difference between this group and previous generations will be bigger.