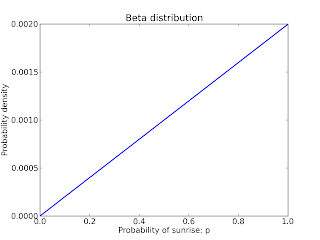 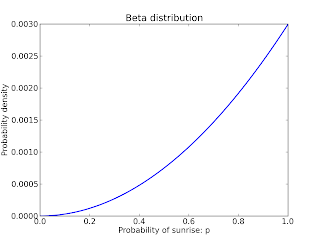 If we use the Beta distribution to compute the same probability, the result is also 0.75.  So Price's calculations are consistent with mine; he just uses a different way of summarizing them.
Posted by Allen Downey at 9:39 AM 10 comments:

At PyCon last week I taught a tutorial on Bayesian statistics.  It is based on Chapters 5 and 8 of Think Stats.  Here is the web page I created for the tutorial.

And here, courtesy of PyCon and pyvideo.org, is the video.  It's three hours long, so get comfortable!

Here's a screencap of me magically deriving Bayes's Theorem: 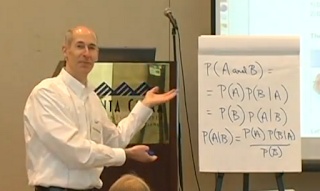 And here's the description and outline, from the PyCon page:

This tutorial is an introduction to Bayesian statistics using Python. My goal is to help participants understand the concepts and solve real problems. We will use material from my book, Think Stats: Probability and Statistics for Programmers (O’Reilly Media).

Bayesian statistical methods are becoming more common and more important, but there are not many resources to help beginners get started. People who know Python can use their programming skills to get a head start.
I will present simple programs that demonstrate the concepts of Bayesian statistics, and apply them to a range of example problems. Participants will work hands-on with example code and practice on example problems.
Students should have at least basic level Python and basic statistics. If you learned about Bayes’s Theorem and probability distributions at some time, that’s enough, even if you don’t remember it! Students should be comfortable with logarithms and plotting data on a log scale.
Students should bring a laptop with Python 2.x and matplotlib. You can work in any environment; you just need to be able to download a Python program and run it.
Outline:
Posted by Allen Downey at 6:57 PM No comments: