Are you popular? Hint: no.

According to this feel-good article in Scientific American, you are probably less popular than your friends.  The author, John Allen Paulos, explains:

“...it’s more probable that we will be among a popular person’s friends simply because he or she has a larger number of them.”

To see how this works in social networks, I downloaded data from the Stanford Large Network Dataset Collection; one of the datasets there contains friend/foe information from the Slashdot Zoo.  For each (anonymized) user, we have the number of other users he or she tagged as a friend or foe.

There are more than 82,000 users in the dataset.  The average user has 55 friends and foes, but the median is only 18, which suggests that the distribution is skewed to the right.  In fact, the distribution is heavy tailed, as shown in the figure below. 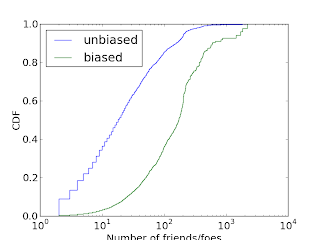 To compute the biased distribution, we loop through the items in the PMF and multiply each probability by its corresponding value.  Here’s what the code looks like:


This code uses the PMF library, which you can read about in my book, Think Stats.
Posted by Allen Downey at 8:10 AM 1 comment:

I have good news to report -- the obesity epidemic is over.  And the solution turns out to be the best kind: simple and completely painless.  The solution is self-reporting.  Instead of weighing people, all we have to do is ask them what they weigh.  Problem solved!

I got data from the Behavioral Risk Factor Surveillance System (BRFSS), run by the National Center for Chronic Disease Prevention and Health Promotion.  In 2008, they surveyed 414,509 respondents and asked about their demographics, health and health risks.  In particular, they asked respondents for their weight now and their weight one year ago.

Of course, this result is unrelated to reality.  In fact, most adults gain about a pound a year.  The most likely explanation is some combination of inaccurate recall, self-delusion, and attempts by respondents to impress surveyors.

But before making harsh judgments, let’s look more closely at the data.  Before computing the mean change, I discarded a few outliers -- anyone who reported a change of more than 40 kg.  Even so, the mean can be misleading, so we should look at the distribution.  This figure shows the cumulative distribution (CDF) of reported weight changes: 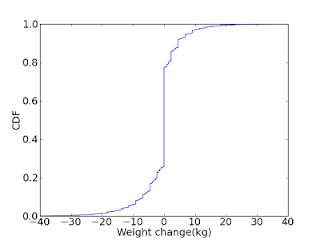 About 25% of respondents reported a weight loss, 52% reported no change, and 23% reported a gain.  The distribution is roughly symmetric, but we can get a better look by plotting CDFs for gains and losses: 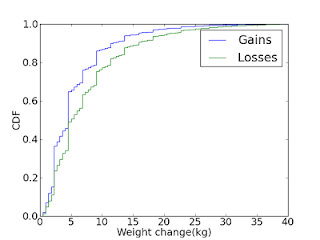 The curves have the same shape, but the distribution of losses is shifted to the right.  This result suggests that we can’t blame a small number of wildly inaccurate respondents; delusion seems to be widespread.

These data demonstrate the dangers of self-reporting.  Even when surveys are administered carefully, people tend to remember wrongly, kid themselves, and portray themselves in a positive light.

But if you want the obesity epidemic to go away, just ask! 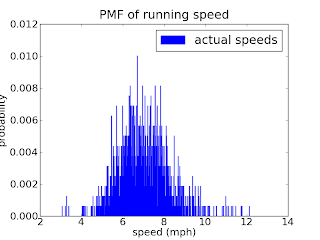 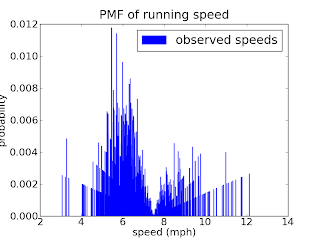 Posted by Allen Downey at 6:13 AM No comments:

I am enjoying Charles Seife’s Proofiness, but have to point out what I think is a flaw.  A major part of the book addresses errors in elections and election polls, and Seife presents a detailed analysis of two contested elections: Franken vs. Coleman in Minnesota and Gore vs. Bush in Florida.

In both cases the margin of victory was (much) smaller than the margin of error, and Seife concludes that the result should be considered a tie.  He points out:


“...both states, by coincidence, happen to break a tie in exactly the same way.  In the case of a tie vote, the winner shall be determined by lot.  In other words, flip a coin.  It’s hard to swallow, but the 2008 Minnesota Senate race and, even more startling, the 2000 presidential election should have been settled with the flip of a coin.”

So far, I agree, but Seife implies that this solution would avoid the legal manipulations that follow close elections (which he describes in entertaining detail, including a contested ballot in Minnesota full of write-in votes for “Lizard People”).

But Seife doesn’t solve the problem; he only moves it.  Instead of two outcomes (A wins and B wins) there are three (A wins, statistical tie, B wins), but the lines between outcomes are just as sharp, so any election that approaches them will be just as sharply contested.

As always, the correct solution is easy if you just apply Bayesian statistics.  In order to compute the margin of error, we need a model of the error process (for example, there is a chance that any vote will be lost, and a chance that any vote will be double counted).  With a model like that, we can use the observed vote count to compute the probability that either candidate received more votes.  Then we toss a biased coin, with the computed probability, to determine the winner.

For example, the final count in the 2008 Minnesota Senate race was 1,212,629 votes for Franken and 1,212,317 votes for Coleman.  But the actual number of votes cast for each candidate could easily be 1000 more or less than the count, so it is possible that Coleman actually received more votes; if we do the math, we might find that the probability is 30%.  In that case, I suggest, we should choose a random number between 1 and 100, and if it is less than 30, Coleman wins.

This system has a few nice properties: it solves the problem Seife calls “disestimation,” which is the tendency to pretend that measurements are more precise than they are.  And it is fair in the sense that the probability of winning equals the probability of receiving more votes.

There are drawbacks.  One is that it, in order to model the error process, we have to acknowledge that there are errors, which is unpalatable.  The other is that it is possible for a candidate with a higher vote count to lose.  That outcome would be strange, but certainly no stranger than the result of the 2000 presidential election.
-----

If you find this sort of thing interesting, you might like my free statistics textbook, Think Stats. You can download it or read it at thinkstats.com.
Posted by Allen Downey at 7:54 AM 5 comments: