Last fall I taught an introduction to Bayesian statistics at Olin College.  My students worked on some excellent projects, and I invited them to write up their results as guest articles for this blog.  Previous articles in the series are:

Now, with the Boston Marathon coming up, we have an article about predicting world record marathon times.

In this blog article, Allen Downey shows that marathon world record times have been advancing at a linear rate. He uses least squares estimation to calculate the parameters of the line of best fit, and predicts that the first 2-hour marathon will occur around 2041.


I extend his model, and calculate how likely it will be that someone will run a 2-hour marathon in 2041. Or more generally, I find the probability distribution of a certain record being hit on a certain date.


I break down my process into 4 steps:

What are my prior hypotheses?

Since we are assuming the trend in running times is linear, I write my guesses as linear functions,
yi(xi) = α + βx + ei ,
where α and β are constants and ei is random error drawn from a normal distribution characterized by standard deviation σ. Thus I choose my priors to be list of combinations of α, β, and σ.


I set the values of α, β, and σ partially on the least squares estimate and partially on trial and error. I initialize my prior hypotheses to be uniformly distributed.

How do I update my priors?

I perform a bayesian update based on a list of running records. For each running record, (date, record_mph), I calculate the likelihood based on the following function.


I find the error between the hypothesized record and the measured record (in miles per hour), then I find the probability of seeing that error given the normal distribution with standard deviation of σ.

The posterior PMFs for α, β, and σ 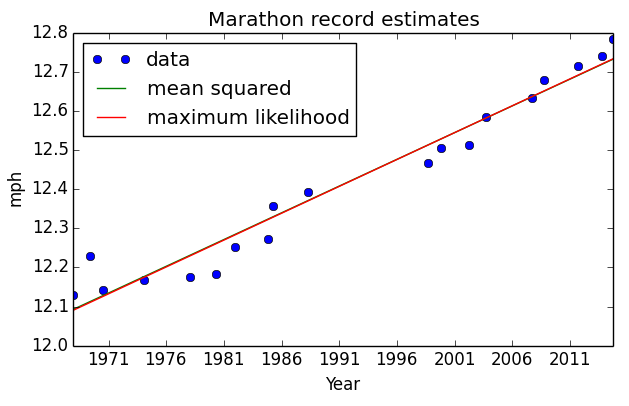 But I use these distributions to estimate more than a single line! I create a monte-carlo simulation of running records.

How do I simulate these records?

I pull a random α, β, and σ from their PMF (weighted by probability), generate a list of records for each year from 2014 to 2060, then repeat. The results are in the figure below, plotted alongside the previous records. 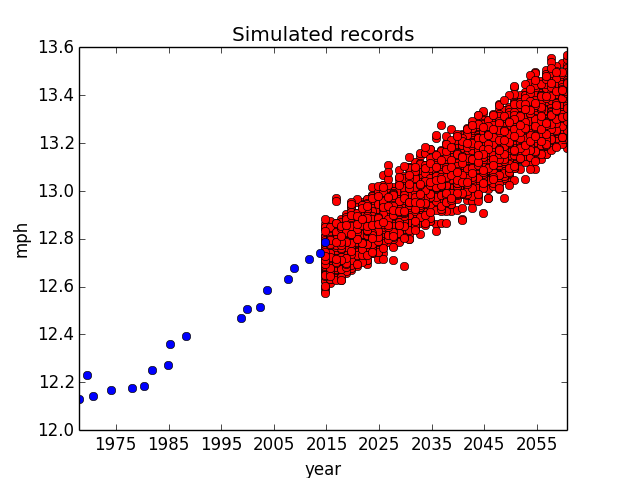 It may seem counterintuitive to see simulated running speeds fall below the current records, but it make sense! Think of those as years wherein the first-place marathon didn’t set a world-record.


These simulated records are most dense where they are most likely, but the scatter plot is a poor visualization of their densities. To fix this, I merge the points into discrete buckets and count the number of points in each bucket to estimate their probabilities. This resulting joint probability distribution is what I’ve been looking for: given a date and a record, I can tell you the probability of setting that record on that date. I plot the joint distribution in the figure below. 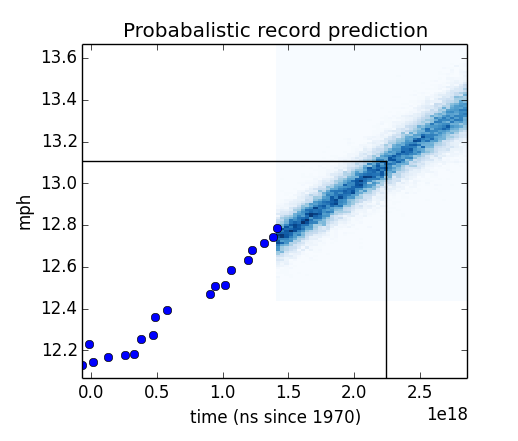 It is difficult to create a pcolor plot with pandas Timestamp objects as the unit, so I use nanoseconds since 1970. The vertical and horizontal lines are at year 2041 and 13.11mph (the two-hour marathon pace). The lines fall within a dense region of the graph, which indicates that they are likely.


This answers my original question. There is a 38.5% probability that someone will have run a two-hour marathon by the end of 2041.


To get a bigger picture, I create a similar conditional PMF for each running speed bucket, convert it to a CDF, and extract the years corresponding to several percentiles. The 95th percentile means there is a 95% probability of reaching that particular running speed by that year. I plot these percentiles to get a better sense of how likely any record is to be broken by any date. 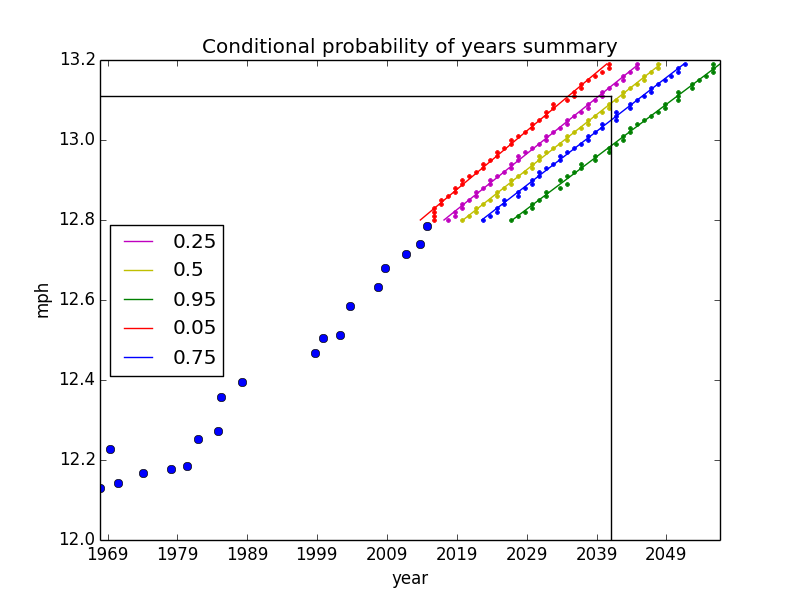 Posted by Allen Downey at 5:56 AM No comments: