In response to my article about the increasing numbers of students entering college with no religious affiliation, a reader wrote:


A potentially interesting trend to look at is the religious participation of students attending Catholic or other religious institutions. I wonder if the trend is toward religious students (those who report both religious affiliation and participation in students) being more likely to go to religiously-affiliated colleges. This would mean a reduction of religious students at state/non-sectarian schools and an increase in the religiosity of students at affiliated schools (this might even be skewed because the survey doesn't include some of the most religious schools such as Liberty University). This would be a reflection of the increasing polarization of our society.

On another subject, I tend to distrust steadily increasing social trends. From a complexity theory perspective, I would expect more of a cycle in religious (dis-)belief, so I wouldn't be surprised to see a crash in the number of non-believers sometime in the near future, although predicting exactly when that will happen is virtually impossible with the relatively small amount of data available (40 years is not enough).

There are several interesting questions here.  The first is whether religious colleges are getting more religious.  This one is relatively easy to investigate: the HERI survey provides data broken down by several types of colleges, including Nonsectarian, Catholic, and Other Religious Affiliation.


The good news is that their reports are available in PDF now.  The bad news is that most of the older ones are scanned and not OCRed, so they are not easy to search.  I went through them by hand, but I only extracted the data at 5-year intervals.  Here is what the trends look like for students responding "None" for religious preference at Private nonsectarian 4-year colleges, Catholic colleges, and Other religious colleges: 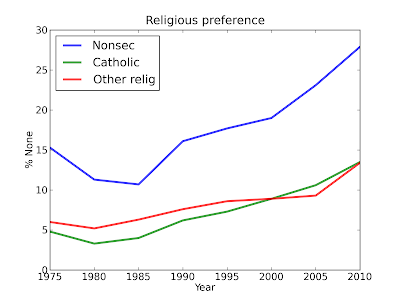 
As an aside, I also plotted data for historically black colleges and universities (HBCU).  Here's what that looks like: 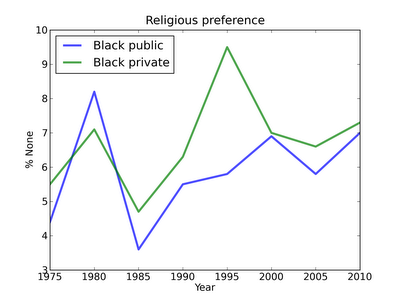 Clearly the trend is slower; in fact, it is not obvious that it is statistically significant.  And since about 1990, the percentage of Nones is higher at religious colleges than at HBCUs, by more than a factor of two (13%, compared with 7%).


Getting back to the reader's question, it doesn't look like the religious schools are getting more religious.    In fact, they are getting less religious at almost the same rate as other schools.  But maybe the fraction of students going to religious colleges is increasing?


Here is a table from the National Center For Educational Statistics, which publishes the Digest of Education Statistics.  It shows "Fall enrollment and number of degree-granting institutions, by control and affiliation of institution: Selected years, 1980 through 2009." 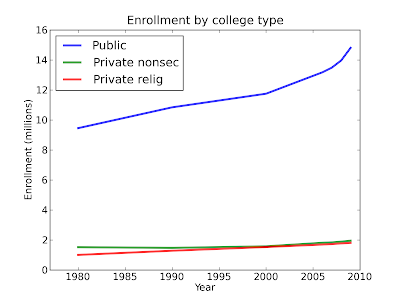 Enrollments have been increasing for all college types, with religious colleges growing faster than private nonsectarian colleges until 1995.  Here's what these data look like expressed as a percent of the total: 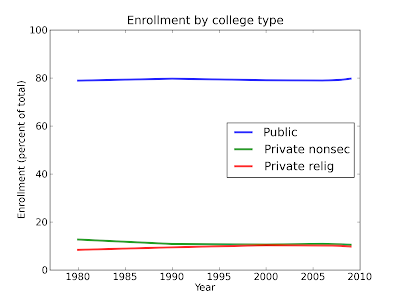 Before 1995, religious colleges were gaining market share, at the expense of nonsectarian colleges; other than that, there is not much going on.


So, to address the reader's questions:


As for distrusting steadily increasing social trends, I agree that some caution is needed.  The percentage of Nones can't keep accelerating forever.  But it can keep growing forever.

Steven Pinker presents several one-way trends in his new book, The Better Angels of Our Nature.  And Peter Singer, who reviewed Pinker's book in the New York Times, discussed related ideas in The Expanding Circle.

But who knows?  I guess we'll see what next year's data point looks like.

Many thanks to the reader who posted the comments that prompted this update.


Posted by Allen Downey at 7:47 AM No comments: