Last fall I taught an introduction to Bayesian statistics at Olin College.  My students worked on some excellent projects, and I invited them to write up their results as guest articles for this blog.

One of the teams applied Bayesian survival analysis to the characters in A Song of Ice and Fire, the book series by George R. R. Martin.  Using data from the first 5 books, they generate predictions for which characters are likely to survive and which might die in the forthcoming books.

With Season 5 of the Game of Thrones television series starting on April 12, we thought this would be a good time to publish their report.

The Song of Ice and Fire series has a reputation for being quite deadly. No character, good or bad, major or minor is safe from Martin’s pen. The reputation is not unwarranted; of the 916 named characters that populate Martin’s world, a third have died, alongside uncounted nameless ones.


In this report, we take a closer look at the patterns of death in the novels and create a Bayesian model that predicts the probability that characters will survive the next two books.

Using data from A Wiki of Ice and Fire, we created a dataset of all 916 characters that appeared in the books so far. For every character, we know what chapter and book they first appeared, if they are male or female, if they are part of the nobility or not, what major house they are loyal to, and, if applicable, the chapter and book of their death.  We used this data to predict which characters will survive the next couple books.

The main code used to update these distributions is:

For the Night’s Watch, this lead to the posterior distribution in Figure 3. 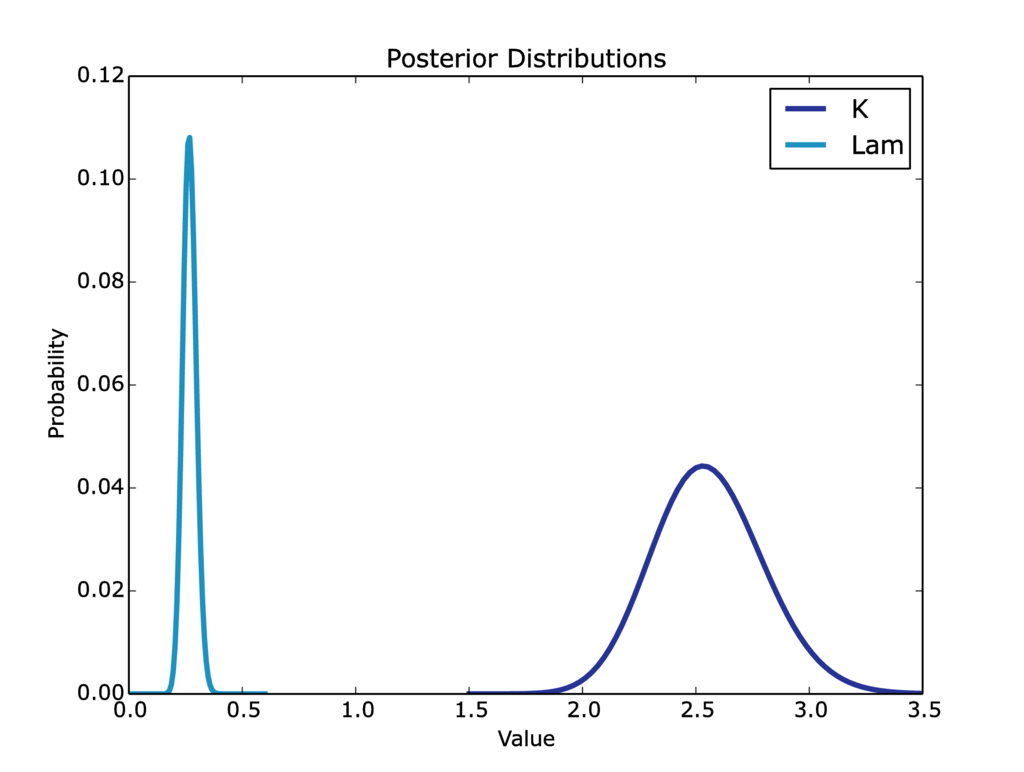 Using this analysis, we can can begin to make a prediction for an individual character like Jon Snow.  At the end of A Dance with Dragons, the credible interval for the Night’s Watch survival (Figure 4) stretches from 36 percent to 56 percent. The odds are not exactly rosy that Jon snow is still alive. Even if Jon is still alive at the end of book 5, the odds that he will survive the next two books drop to between 30 percent and 51 percent. 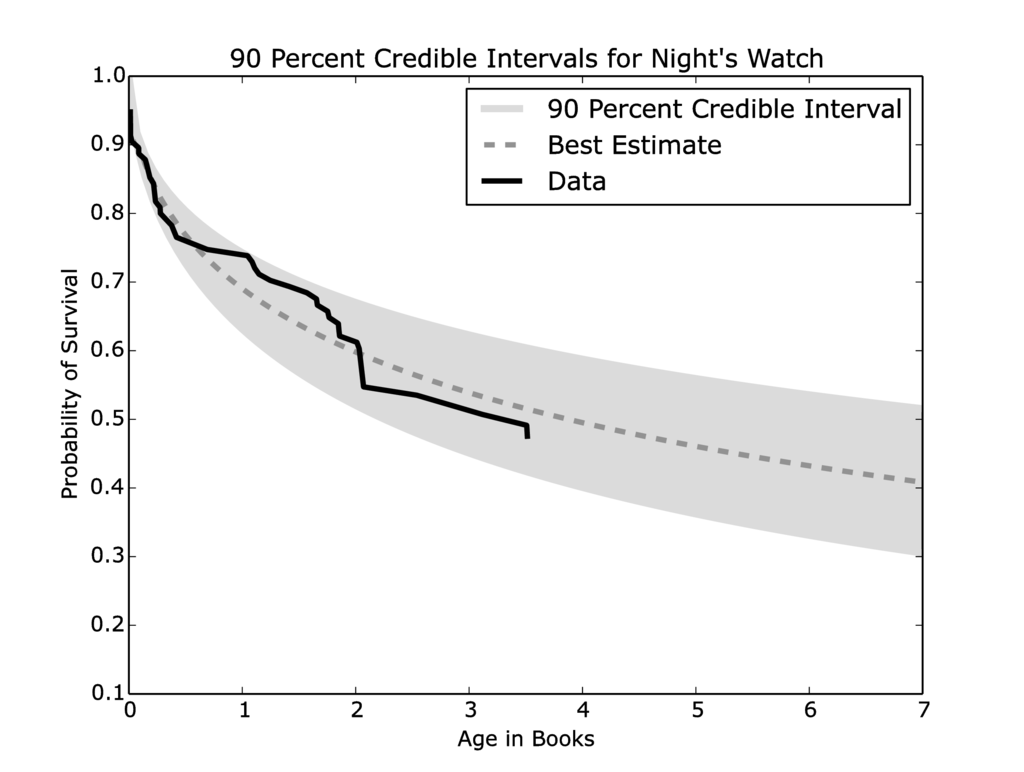 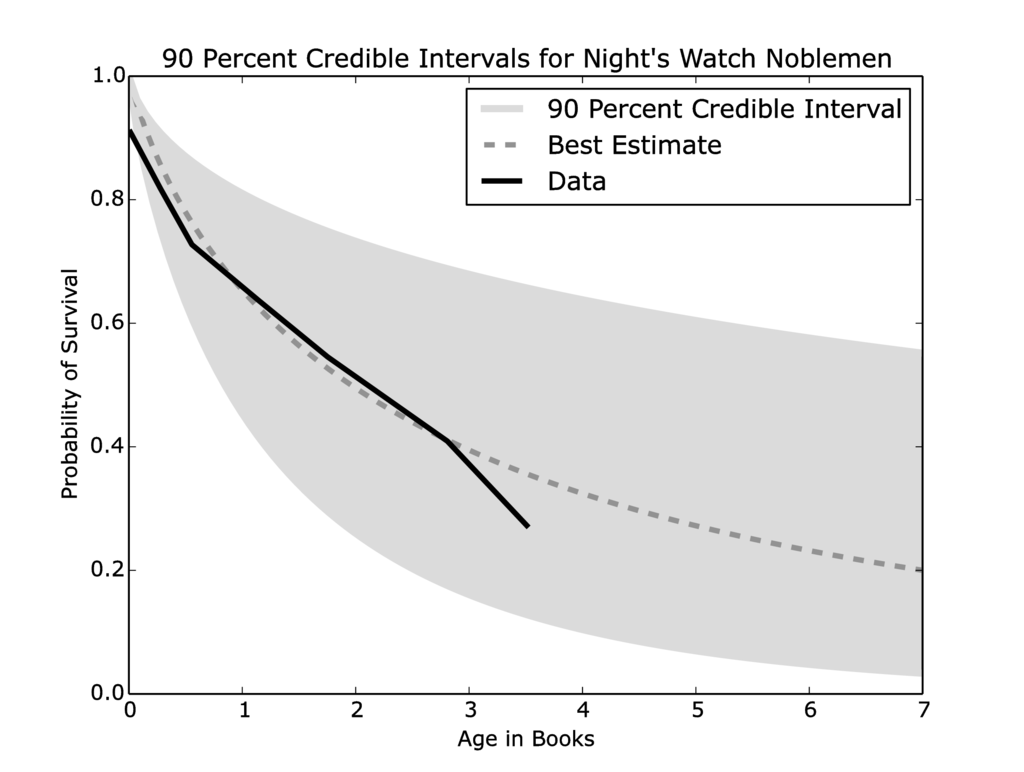 The Houses of ASOIAF

The 90 percent credible intervals for all of the major houses. This includes the 9 major houses, the Night’s Watch, the Wildlings, and a "None" category which includes non-allied characters. 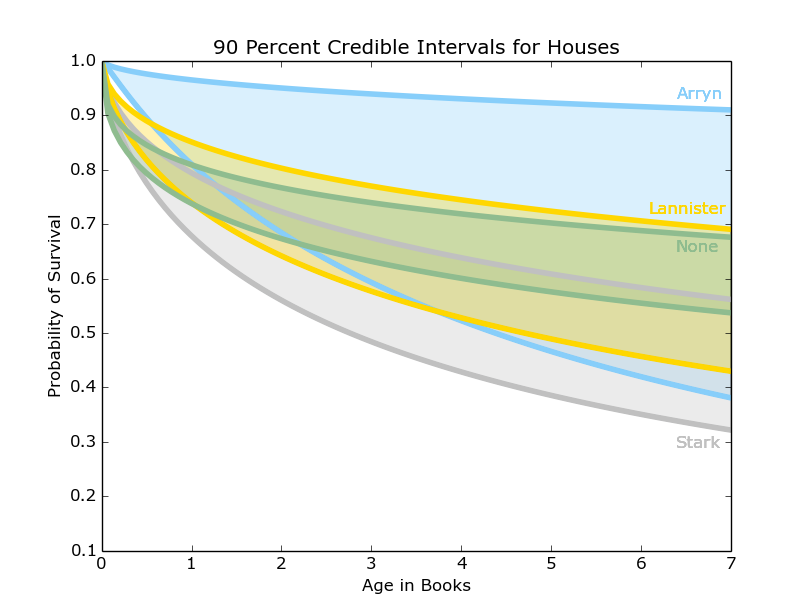 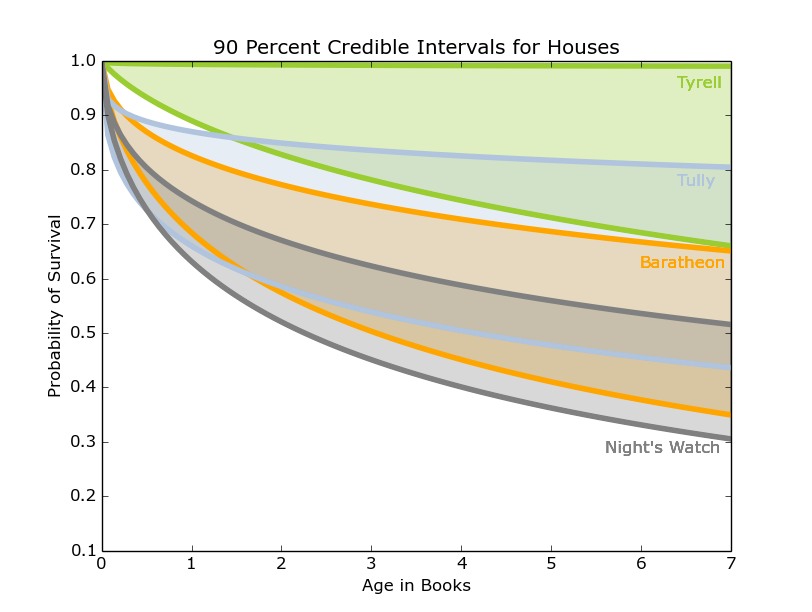 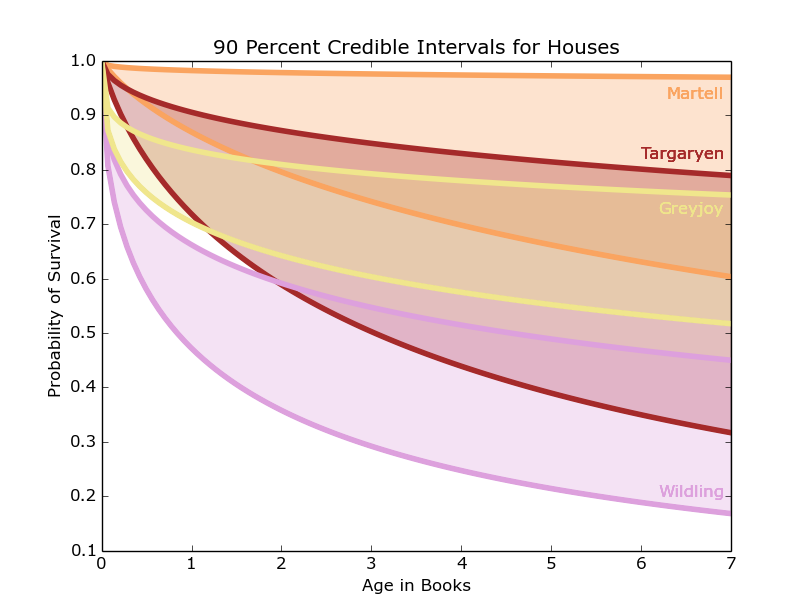 These intervals, shown in Figures 6, 7, and 8, demonstrate a much higher survival probability for the houses Arryn, Tyrell, and Martell. Supporting these results, these houses have stayed out of most of the major conflicts in the books, however this also means there is less information on them. We have 5 or fewer examples of dead members for those houses, so the survival curves don’t have very many points. This uncertainty is reflected in the wide credible intervals.

In contrast, our friends in the north, the Starks, Night’s Watch, and Wildlings have the lowest projected survival rates and smaller credible intervals given their warring positions in the story and the many important characters included amongst their ranks. This analysis considers entire houses, but there are also additional ways to sort the characters.

While A Song of Ice and Fire has been lauded for portraying women as complex characters who take an a variety of roles, there are still many more male characters (769) than female ones (157). Despite a wider credible interval, the women tend to fare better than their male counterparts, out-surviving them by a wide margin as seen in Figure 9. 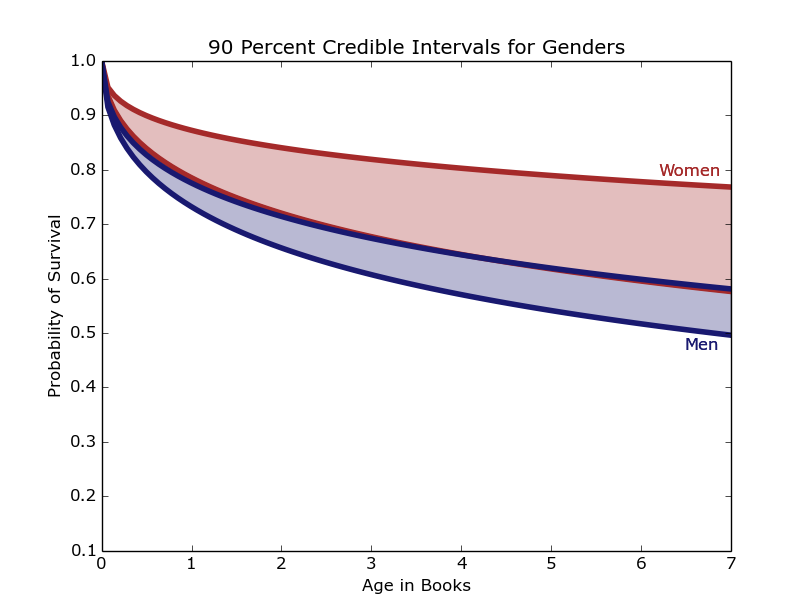 The ratio between noble characters(429) and smallfolk characters (487) is much more even than gender and provides an interesting comparison for analysis. Figure 10 suggests that while more smallfolk tend to die quickly after being introduced, those that survive their introductions tend to live for a longer period of time and may in fact outpace the nobles. 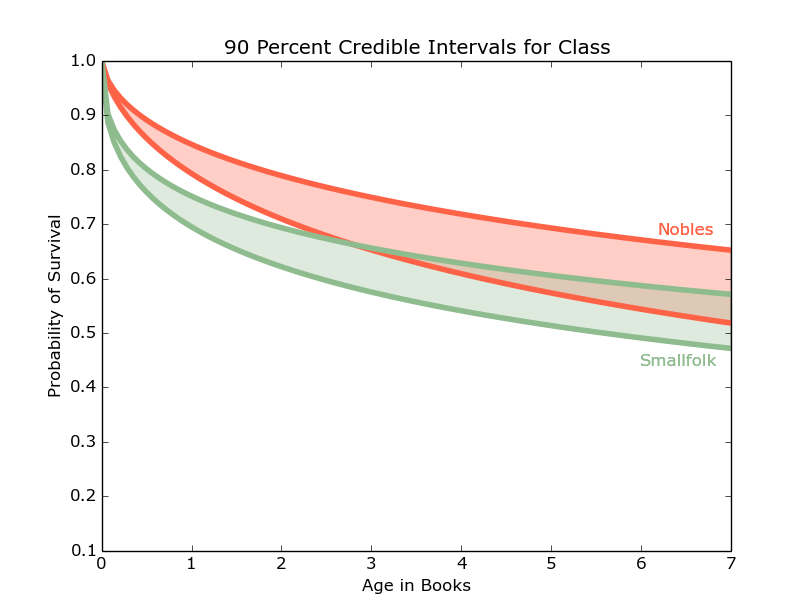 The same analysis can be extended to combine traits, sorting by gender, house, and class to provide a rough model for individual characters. One of the most popular characters in the books is Arya and many readers are curious about her fate in the books to come. The category of noblewomen loyal to the Starks also includes other noteworthy characters like Sansa and Brienne of Tarth (though she was introduced later). Other intriguing characters to investigate are the Lannister noblewomen Cersei and poor Myrcella. As it turns out, not a lot noble women die. In order to get more precise credible intervals for the specific female characters we included the data of both noble and smallfolk women. 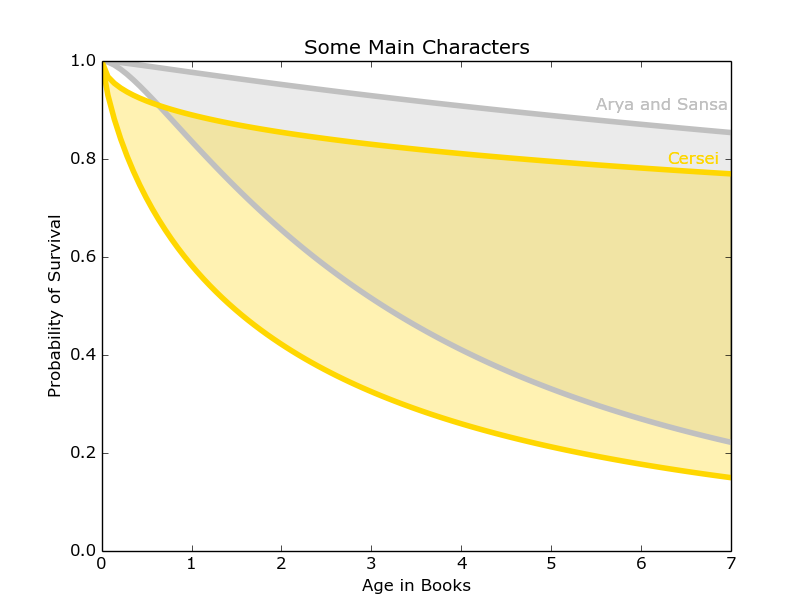 The data presented in Figure 11 is inconclusive, but it looks like Arya has a slightly better chance of survival than Cersei.

Two minor characters we are curious about are Val, the wildling princess, and the mysterious Quaithe. 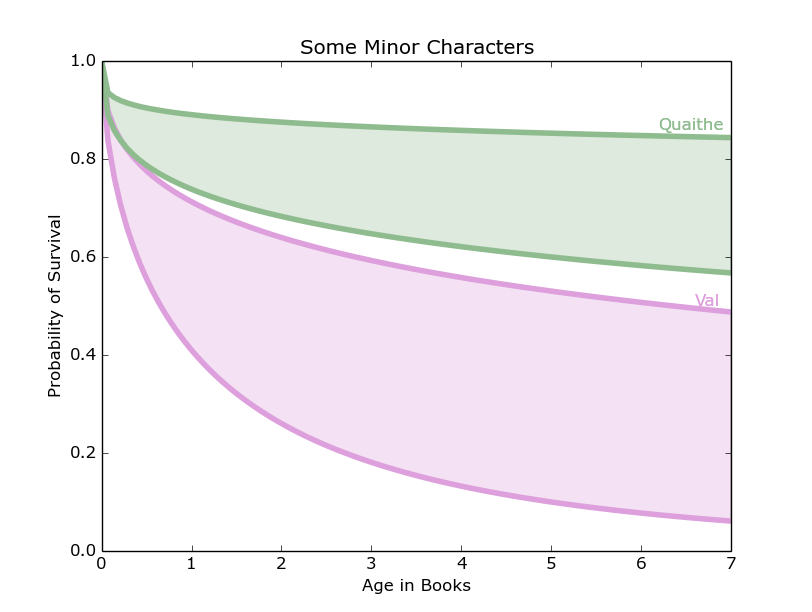 They both had more data than the Starks and Lannisters, but they have the complication that they were not introduced at the beginning of the series. Val is introduced at 2.1 books, and so her chances of surviving the whole series are between 10 percent and 53 percent, which are not the most inspiring of chances.

Quaithe is introduced at 1.2 books, and her chances are between 58 percent and 85 percent, which are significantly better than Val’s. These curves are shown in Figure 12.

For most of the male characters (with the exception of Mance), there was enough data to narrow to house, gender and class. 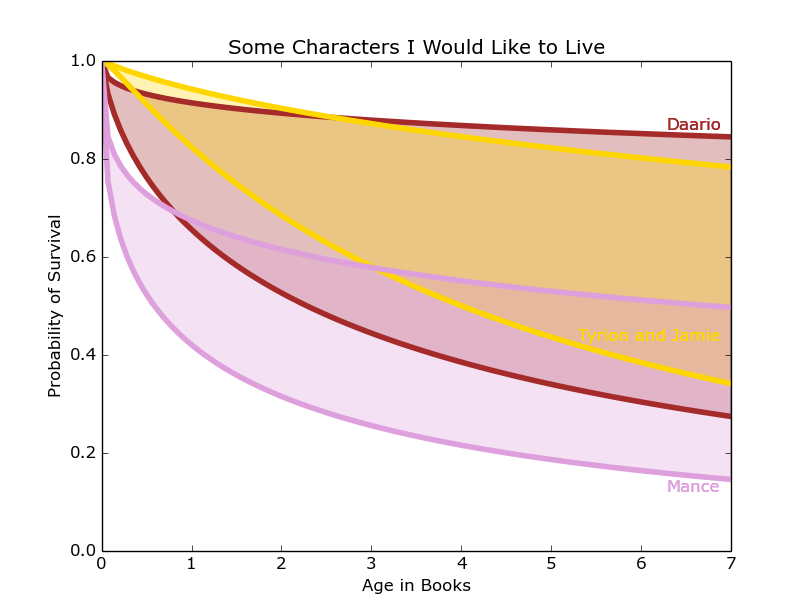 Figure 13 shows the Lannister brothers with middling survival chances ranging from 35 percent to 79 percent. The data for Daario is less conclusive, but seems hopeful, especially considering he was introduced at 2.5 books. Mance seems to have to worst chance of surviving until the end. He was introduced at 2.2 books, giving him a chance of survival between 19 percent and 56 percent. 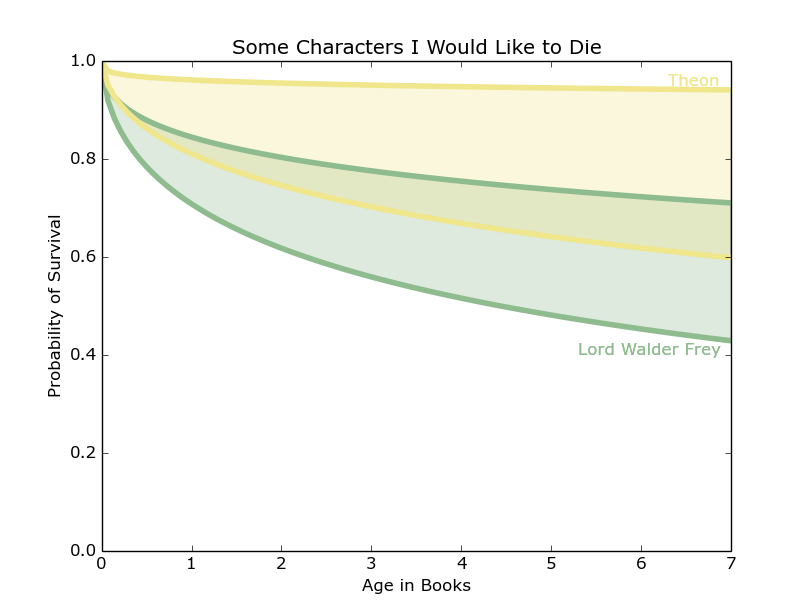 Some characters who many wouldn’t mind seeing kick the bucket include Lord Walder Frey and Theon Greyjoy. However, Figure 14 suggests that neither are likely meet untimely (or in Walder Frey’s case, very timely) deaths. Theon seems likely to survive to the bitter end. Walder Frey was introduced at 0.4 books, putting his chances at 44 percent to 72 percent. As it is now, Hoster Tully may be the only character to die of old age, so perhaps Frey will hold out until the end.

Of course who lives and who dies in the next two books has more to do with plot and storyline than with statistics. Nonetheless, using our data we were able we were able to see patterns of life and death among groups of characters. For some characters, especially males, we are able to make specific predictions of how they will fare in the next novels.  For females and characters from the less central houses, the verdict is still out.

Our data and code are available from this GitHub repository.

Notes on the Data Set

Most characters were fairly easy to classify, but there are always edge cases.

Statistical inference is only mostly wrong

The journal Basic and Applied Social Psychology (BASP) made news recently by "banning" p-values.  Here's a summary of their major points:
There are many parts of this new policy, and the rationale for it, that I agree with.  But there are several things I think they got wrong, both in the diagnosis and the prescription.  So I find myself -- to my great surprise -- defending classical statistical inference.  I'll take their points one at a time:

Classical hypothesis testing is problematic, but it is not "invalid", provided that you remember what it is and what it means.  A hypothesis test is a partial answer to the question, "Is it likely that I am getting fooled by randomness?"

Suppose you see an apparent effect, like a difference between two groups.  An example I use in Think Stats is the apparent difference in pregnancy length between first babies and others: in a sample of more than 9000 pregnancies in a national survey, first babies are born about 13 hours earlier, on average, than other babies.

There are several possible explanations for this difference:

Hypothesis testing addresses only the last possibility.  It asks, "If there were actually no difference between first babies and others, what would be the chance of selecting a sample with a difference as big as 13 hours?"  The answer to this question is the p-value.

There is nothing invalid about these conclusions, provided that you remember a few caveats:

If you run an experiment and observe an effect, like the 13-hour difference in pregnancy length, you might wonder whether you would see the same thing if you ran the experiment again.  Would it always be 13 hours, or might it range between 12 and 14?  Or maybe between 11 and 15?

You can answer these questions by
Confidence intervals and standard errors are two ways to summarize the sampling distribution and indicate the precision of the estimate.

Again, confidence intervals are useful if you remember what they mean:
As the editors of BASP point out, "a 95% confidence interval does not indicate that the parameter of interest has a 95% probability of being within the interval."  Ironically, the situation is worse when the sample size is large.  In that case, the CI is usually small, other sources of error dominate, and the CI is less likely to contain the actual value.

The editors of BASP write that the problem with Bayesian statistics is that "they depend on some sort of Laplacian assumption to generate numbers where none exist."  This is an indirect reference to the fact that Bayesian analysis depends on the choice of a prior distribution, and to Laplace's principle of indifference, which is an approach some people recommend for choosing priors.

The editors' comments evoke a misunderstanding of Bayesian methods.  If you use Bayesian methods as another way to compute p-values and confidence intervals, you are missing the point.  Bayesian methods don't do the same things better; they do different things, which are better.

But I don't want to get bogged down in a Bayesian-frequentist debate.  Let me get back to the BASP editorial.

Conventional statistical inference, using p-values and confidence intervals, is problematic, and it fosters bad science, as the editors of BASP claim.  These problems have been known for a long time, but previous attempts to instigate change have failed.  The BASP ban (and the reaction it provoked) might be just what we need to get things moving.

But the proposed solution is too blunt; statistical inference is broken but not useless.  Here is the approach I recommend:
For me, the timing of the BASP editorial is helpful.  I am preparing a new tutorial on statistical inference, which I will present at PyCon 2015 in April.  The topic just got a little livelier!

In a discussion of confidence intervals on Reddit, I wrote

"The CI quantifies uncertainty due to random sampling, but it says nothing about sampling bias or measurement error. Because these other sources of error are present in nearly all real studies, published CIs will contain the population value far less often than 90%."

A fellow redditor raised an objection I'll try to paraphrase:

The reason for the disagreement is that my correspondent and I were using different definitions of CI:
If you use the first definition, the problem with CIs is that they don't contain the true value 90% of the time.

If you use the second definition, the problem with CIs is that our standard way of computing them doesn't work, at least not in the real world.

Once this point was clarified, my correspondent and I agreed about the conclusion: the fraction of published CIs that contain the true value of the parameter is less than 90%, and probably a lot less.