Think Stats will be published by O'Reilly in June

No statistics today, just news.  I signed a contract with O'Reilly to publish Think Stats.  I turn in the manuscript next week, and it should be out in June.  So if you find any errors, now is the time to tell me!

Some people have asked if I get to choose the animal on the cover (which is a signature of O'Reilly cover design).  The short answer is no.

First, I'm actually not sure whether Think Stats will be an "animal book" or part of another O'Reilly series. We haven't talked about it.

Also, here's what the O'Reilly author materials have to say on the topic:

The purpose of a book cover is to get a potential reader to pick up the book, and to persuade a bookstore to display it.
We're confident that we have the most striking and effective covers in technical publishing. Despite our relatively small size, it's not unusual to see window displays of our books at technical bookstores.
Our covers are all designed by Edie Freedman. She is open to suggestions, but has the final say on all cover designs. Here's what Edie has to say about how she designs the animal covers for Nutshell Handbooks:

I ask the authors to supply me with a description of the topic of the book. What I am looking for is adjectives that really give me an idea of the "personality" of the topic. Authors are free to make suggestions about animals, but I prefer to deal with adjectives. Once I have the information from the author, I spend some time thinking about it, and then I choose an animal. Sometimes it is based on no more than what the title sounds like. (COFF, for example, sounded like a walrus noise to me.) Sometimes it is very much linked to the name of the book or software. (For example, vi, the "Visual Editor," suggested some beast with huge eyes). And it is always subject to what sort of artwork I can find.
It seems to work best this way. We've tried doing animals that the authors want, and have found that it works better if I do the selection, and then submit it for approval. I don't think anyone has been too disappointed with the final choices we've made.

I'll add that if you do want a particular animal, Edie is more inclined to respond to "right brain" reasons than to obvious mental associations. For example, several people on the net suggested the obvious clam for the Perl handbook, but Edie responded instead to Larry Wall's obscure argument for the camel: ugly but serviceable, able to go long distances without a lot of nourishment.
In any event, you'll have a chance to see and comment on Edie's cover design before we commit it to print. If you really hate it, and can't be persuaded to feel otherwise, she'll probably try again (but no promises!).
So here's what I have for "right brain" ideas:  the themes of the books are curiosity and analysis.  One of the problems I see with conventional approaches to statistics is that it makes people timid -- afraid to do the wrong thing.  One of my goals with this approach is to help students be fearless.  So I want something curious and fearless.  Ideas?

Here's another article about the animal selection process.

And here's the list of animals they've already used.

And here it is: 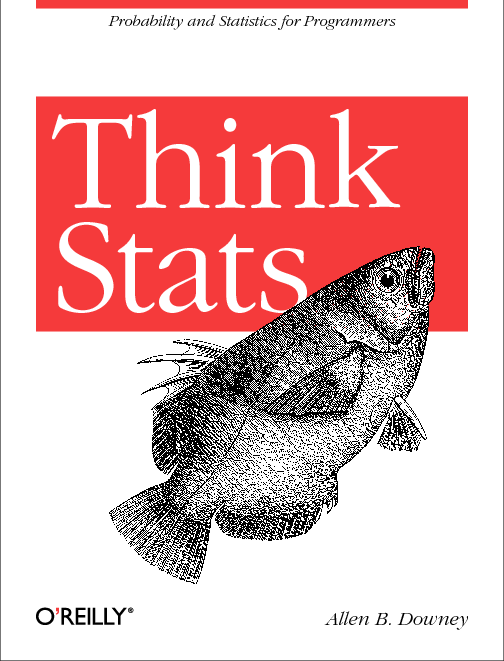 The line drawing looks better at higher resolution, but you get the idea.  Can anyone name that fish?
Posted by Allen Downey at 5:11 PM