Blow it up and start again

The president of Olin College, Rick Miller, spoke recently at the Business Innovation Factory.  Here's the most-tweeted quote from the talk: "The only way to change education is to blow it up and start again." 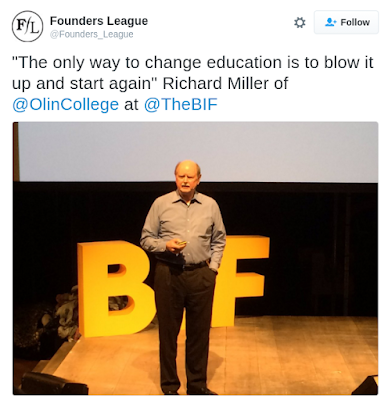 I agree, and I saw an example recently that helps make the point.  The American Statistical Association recently published this Statement on p-Values.  Here's how it starts:


In February 2014, George Cobb, Professor Emeritus of Mathematics
and Statistics at Mount Holyoke College, posed these
questions to an ASA discussion forum:

This "worrisome circularity" is a concrete example of why gradual change is so hard, and why sometimes the only solution is to blow it up and start again.  That idea is scary to a lot of people, but it doesn't have to be.  I have an example that might help, the statistics curriculum at Olin.

First I'll explain what worked, then we'll look at what could have gone wrong.

In 2010, I proposed a new class called Computational Probability and Statistics, as a substitute for a very conventional statistics class that was offered at the time.  My class was based on a library I developed while I was on sabbatical at Google, which is now the thinkstats module in ThinkX.

In 2014 I expanded CompProbStat from 2 credits to 4 and renamed it Data Science.  I recruited external collaborators to provide data and motivating questions for student projects, and several other professors sat in and helped guide student projects.  In 2016 one of those professors took over and taught his version of the class, adding his expertise in machine learning.

At the same time, two of my colleagues were developing their own statistics classes, focused on applications in diverse areas of engineering and science.   None of these classes look much like the conventional statistics material, and they are much better for it.

In six years, we developed five new classes, published two books, got six additional professors involved in teaching data science and statistics, and, most importantly, we developed a curriculum that serves the goals and needs of our students.

How did that happen?

This project would have been impossible at almost any other college.

At most colleges and universities, a professor of computer science (like me) who proposes a new statistics class will not get far, because of two fundamental and unquestioned assumptions of undergraduate education: (1) you need a Ph.D. in a topic before you can teach an introductory course, and (2) if you do research in a field, that makes you better at teaching it to undergraduates.  Note: neither of these is true.

And the content of my courses would have been scrutinized by a committee with a checklist.  To teach something new, you have to stop teaching something old, and it is nearly impossible to get permission to stop teaching anything.  Every topic, no matter how obsolete, is defended by zealots with no respect for evidence or reason.   Fun example: here are Time magazine's Five Reasons Kids Should Still Learn Cursive Writing.  Note: none of them are good.

At Olin, fixing engineering education is our mission.  When someone proposes an experiment, we ask the right questions: Does it contribute to our mission by improving undergraduate education at Olin and other institutions?  Is it a reasonable risk?  And do we have the resources to do it?  If the answers are yes, we do it.  Note: if it's an unreasonable risk and we don't have the resources, sometimes we do it anyway.

The second reason my project would be impossible at most schools is that statistics is owned by the math or statistics department, and even though the faculty don't like teaching classes for non-majors, they get credit for providing "service classes" (a term I would like to ban), so they have an incentive to protect their territory.

At Olin, we have no departments.  We don't have to do this kind of bookkeeping, and that leaves us free to think about the students (remember them?) and design a curriculum that serves their needs.

The third reason my project wouldn't happen anywhere else is that I wouldn't do it anywhere else.  At most universities, there is no incentive to develop new classes; in fact, there is a strong disincentive.  If you try something new, you make enemies, because the new is an insult to the old.  If it doesn't work, you get punished, and even if it works, you get no reward.

The one factor that drives hiring and firing is research.  Even at liberal arts colleges that value good teaching, there is no expectation for innovation.  If you do a decent job of teaching the same two or three classes over and over, that's good enough.  At Olin, we are encouraged to take risks, supported while we work out the bugs, and rewarded for the effort.

Also, at most universities, there is no incentive to write textbooks.  They don't count as research and they don't count as teaching; the time you spend on a textbook is just time you didn't spend on research.  At Olin, we use broad categories to evaluate faculty work, and a successful textbook is valued because it benefits students (at Olin and other institutions) and contributes to our mission to change engineering education.

So blow it up

You don't get a lot of opportunities to blow it up and start again, but when you do, a lot of good things can happen.  It's not as scary as it sounds.