This is an extended version of my article in the Scientific American blog.

The data I used and all of my code are available in this Jupyter notebook.

Secularization in the Unites States

For more than a century religion in the the United States has defied gravity.  According to the Theory of Secularization, as societies become more modern, they become less religious.  Aspects of secularization include decreasing participation in organized religion, loss of religious belief, and declining respect for religious authority.

Until recently the United States has been a nearly unique counterexample, so I would be a fool to join the line of researchers who have predicted the demise of religion in America.  Nevertheless, I predict that secularization in the U.S. will accelerate in the next 20 years.

Using data from the General Social Survey (GSS), I quantify changes since the 1970s in religious affiliation, belief, and attitudes toward religious authority, and present a demographic model that generates predictions.

Religious belief is in decline, as well as confidence in religious institutions:

Let me explain where these predictions come from.  Since 1972 NORC at the University of Chicago has administered the General Social Survey (GSS), which surveys 1000-2000 adults in the U.S. per year.  The survey includes questions related to religious affiliation, attitudes, and beliefs.

Regarding religious affiliation, the GSS asks “What is your religious preference: is it Protestant, Catholic, Jewish, some other religion, or no religion?”  The following figure shows the results, with a 90% interval that quantifies uncertainty due to random sampling. 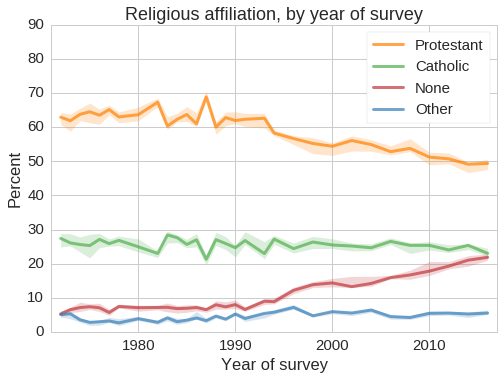 This figure provides an overview of trends in the population, but it is not easy to tell whether they are accelerating, and it does not provide a principled way to make predictions.  Nevertheless, demographic changes like this are highly predictable (at least compared to other kinds of social change).

Religious beliefs and attitudes are primarily determined by the environment people grow up in, including their family life and wider societal influences.  Although some people change religious affiliation later in life, most do not, so changes in the population are largely due to generational replacement.

We can get a better view of these changes if we group people by their year of birth, which captures information about the environment they grew up in, including the probability that they were raised in a religious tradition and their likely exposure to people of other religions.  The following figure shows the results: 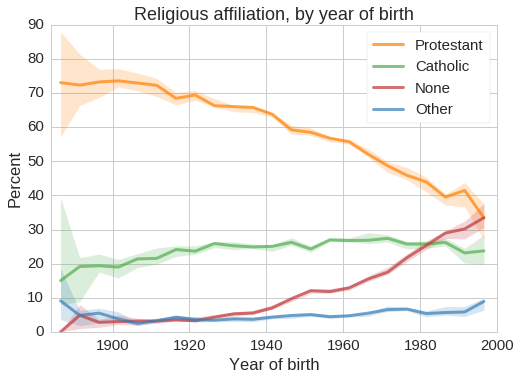 However, this view of the data can be misleading.  Because these surveys were conducted between 1972 and the present, we observe different birth cohorts at different ages.  People born in 1900 were surveyed in their 70s and 80s, whereas people born in 1998 have only been observed at age 18.  If people tend to drift toward, or away from, religion as they age, we would have a biased view of the cohort effect.

Fortunately, with observations over more than 40 years, the design of the GSS makes it possible to estimate the effects of birth year and age simultaneously, using a regression model.  Then we can simulate the results of future surveys.  Here’s how:

The following figure shows the results, with 90% intervals that represent uncertainty due to random sampling in the dataset and random variation in the simulations. 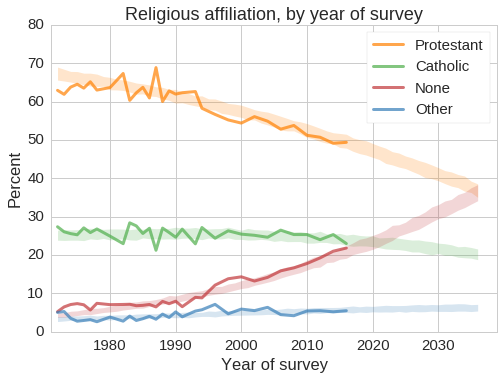 The fraction of “Nones” will increase quickly, overtaking Catholics in the next few years, and possibly becoming the largest religious group in the U.S. by 2036.

Are these predictions credible?

To see how reliable these predictions are, we can use past data to predict the present.  Supposing it’s 2006, and disregarding data from after 2006, the following figure shows the predictions we would make: 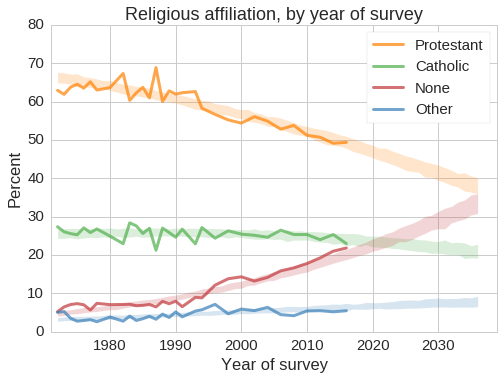 As it turns out, we would have been pretty much right, although we might have underpredicted the growth of the Nones.

These predictions will be wrong if current teenagers are more religious than people in their 20s, or if current children are being raised in a more religious environment.  But if those things were happening, we would probably know.

In fact, these predictions are likely to be conservative:

As affiliation with organized religion has declined, changes in religious belief have been relatively unchanged, a pattern that has been summarized as “believing without belonging”.  However there is evidence that believing will catch up with belonging over the next 20 years.

The GSS asks respondents, “Which statement comes closest to expressing what you believe about God?”

To make the number of categories more manageable, I classify responses 1 and 2 as “no belief”, responses 3, 4, and 5 as “belief”, and response 6 as “strong belief”.

The following figure shows how belief in God varies with year of birth. 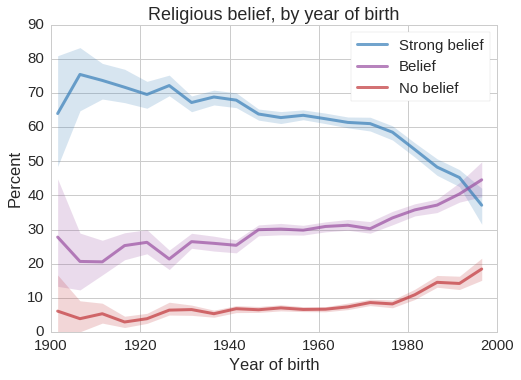 Among people born before 1940, more than 70% profess strong belief in God, but this confidence is in decline; among young adults fewer than 40% are so certain, and nearly 20% are either atheist or agnostic.

Again, we can use these results to model the effect of birth year and age, and use the model to generate predictions.  The following figure shows the results: 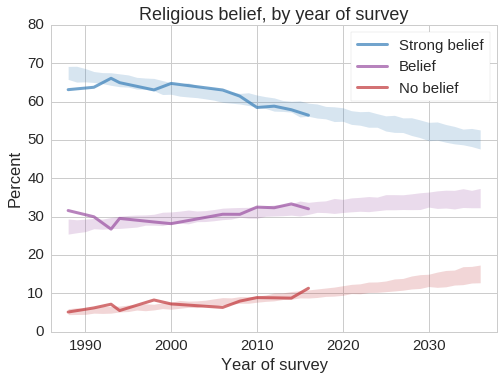 This question was added to the survey in 1988, and it has not been asked every year, so we have less data to work with.  Nevertheless, it is clear that strong belief in God is declining and being replaced by weaker forms of belief and non-belief.

Due to social desirability bias we can’t be sure what part of these trends is due to actual changes in belief, and how much might be the result of weakening stigmas against apostasy and atheism.  Regardless, these results indicate changes in what people say they believe.

The GSS asks respondents, “As far as the people running [organized religion] are concerned, would you say you have a great deal of confidence, only some confidence, or hardly any confidence at all in them?”

The following figure shows how respect for religious authority varies with year of birth. 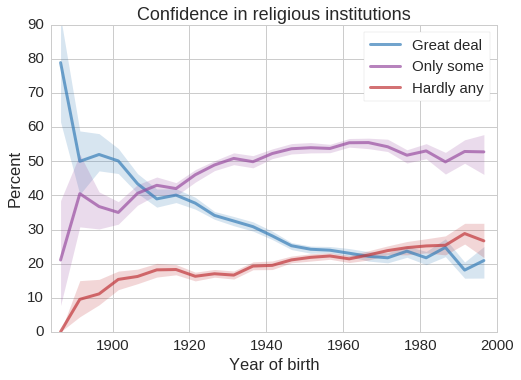 Among people born before 1940, 30 to 50% reported a “great deal” of confidence in the people running religious institutions.  Among young adults, this has dropped to 20%, and more than 25% now report “hardly any confidence at all”.

These changes have been going on for decades, and seem to be unrelated to specific events.  The following figures shows responses to the same question by year of survey.  The Catholic Church sexual abuse cases, which received widespread media attention starting in 1992, have no clear effect on the trends; if anything, confidence in religious institutions increased during the 1990s. 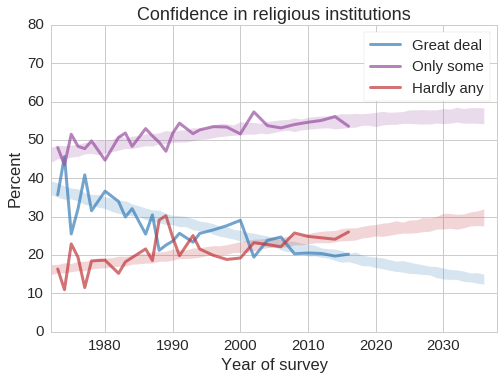 Predictions based on generational replacement suggest that these trends will continue.  Within 20 years, the fraction of people with hardly any confidence in religious institutions will approach 30%.

Interpretation of the Bible

The GSS asks, “Which one of these statements comes closest to describing your feelings about the Bible?”

Responses to this question depend strongly on the respondents’ year of birth: 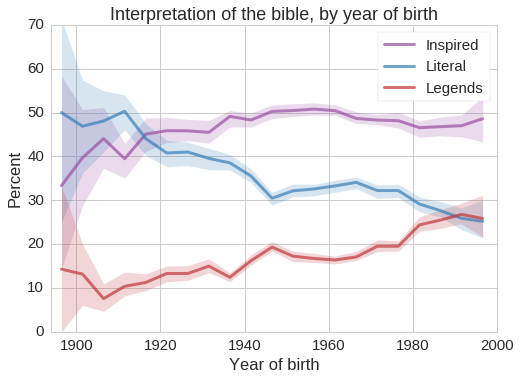 Among people born before 1940, more than 40% say they believe in a literal interpretation of the Christian Bible, and fewer than 15% consider it a collection of fables and legends.  Among young adults, these proportions have converged near 25%.

The following figure shows responses to the same question over time, with predictions. 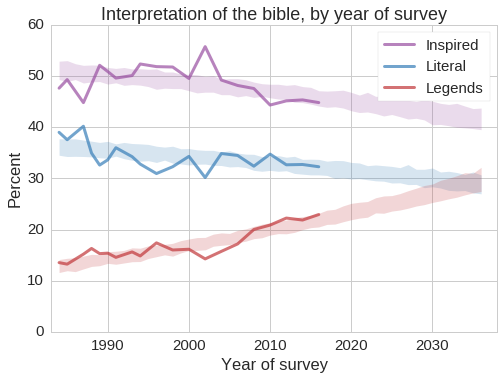 Again, these responses are susceptible to social desirability bias, so they may not reflect true beliefs accurately.  But they reflect changes in what people say they believe, which might cause a feedback effect: as more people express their non-belief, stigmas around atheism will decline, and these trends may accelerate.