On Sunday (September 16, 2018) Eliud Kipchoge ran the Berlin Marathon in 2:01:39, smashing the previous world record by more than a minute and taking a substantial step in the progression toward a two hour marathon.

In a previous article, I noted that the marathon record pace since 1970 has been progressing linearly over time, and I proposed a model that explains why we might expect it to continue.  Based on a linear extrapolation of the data so far, I predicted that someone would break the two hour barrier in 2041, plus or minus a few years.

Now it is time to update my predictions in light of the new record.  The following figure shows the progression of world record pace since 1970 (orange line), a linear fit to the data (blue line) and a 90% predictive confidence interval (shaded area).  The dashed lines show the two hour marathon pace (13.1 mph) and lower and upper bounds for the year we will reach it. 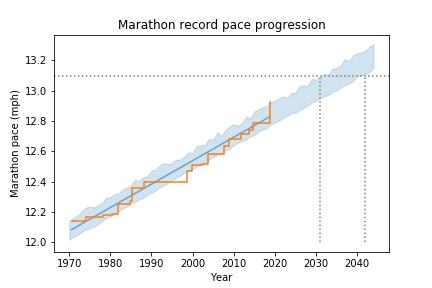 Since the previous record was broken in 2014, we have been slightly behind the long-term trend.  But the new record more than makes up for it, putting us at the upper edge of the predictive interval.

This model predicts that we might see a two hour marathon as early as 2031, and probably will before 2041.

Note that this model is based on data from races.  It is possible that we will see a two hour marathon sooner in under time trial conditions, as in the Nike Breaking2 project.
Posted by Allen Downey at 11:10 AM