In Part One I described some trends in market share of the major religions in the U.S.; in particular, since 1988, the fraction of Protestants dropped from 60% to 51%, and the fraction of people with no religious affiliation increased from 8% to 18%.

I would like to know if something happened after 1988 to cause these changes, or if they could have been predicted based on patterns occurring before 1988.  As a first step, I will use data from 1988 to model vertical transmission (from parent to child) and see if it predicts the observed changes


I model each step of this process using data from the General Social Survey (GSS); specifically, I used these variables.

I used MARELIG and PARELIG to build two "Spouse tables", one for men and one for women.  Here is the table for men:

Here is the spouse table for women:

In general, women are more likely to marry out of their religion than men, but still the great majority marry a co-religionist.  One asymmetry is apparent: men with no religion seldom marry another None (24%), but women with no religion usually do (80%).  This effect is partly due to the gender gap: 11% of male respondents are Nones, but only 5% of the women are (there is a similar, possibly smaller, gender gap in the CIRP data).

Once the respondents have paired up, they decide what religion to raise the children in.  The following table shows results from the 1988 data.  The rows enumerate all pairs of mother's and father's religion; the columns indicate the religious environment they chose.  For example, the second row indicates that if a Protestant woman marries a Catholic man, they raise the children Protestant 58% of the time, Catholic 36% of the time, and None 6%.

One surprise in this table is the last row: when two people with no religion marry, 40% of the time they apparently choose to raise their children Protestant.  This seems unlikely, but there are several possible explanations: (1) the parents might have chosen to raise their children in the prevalent religion of their community, (2) a respondent might not have been raised by his parents, (3) a respondent might not be reporting his parents' religion accurately.  For purposes of modeling I take these responses at face value.


Children raised with a religion usually adopt that religion, but not always.  The following "transition table" shows possible outcomes for each religious environment.  For example, 89% of respondents who say they were raised Protestant also report that their religious preference is Protestant, but 3% are Catholic and 6% have no religious preference.  More people convert from Catholic to Protestant than the other way around.


As expected, the majority of people raised with no religion report no religious preference, but 32% of them identify as Protestant and 11% identify as Catholic.  I found that surprising.  I will look more closely later, but for now, again, I will take it at face value.

Finally, we can combine these results into a single "Generation table" that shows the transitions from one generation to the next.  I ran simulations with following steps.


Since this computation is based on random simulations, it varies from run to run, but here is a typical outcome:


Assuming that a generation time is about 22 years, we can use this model to predict the distribution of religions in 2010 (using only data from 1988).  This figure shows the actual time series and the model predictions for each group: 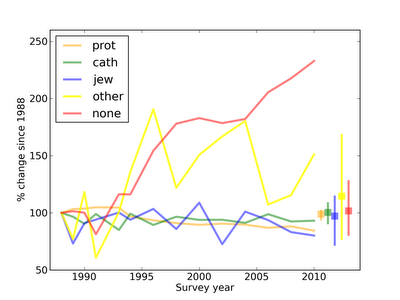 The actual values for Catholics, Jews and Other fall within the prediction intervals, but the model fails to predict the decrease in Protestants or the increase in None.