This post is a excerpt from Think Bayes: Bayesian Statistics Made Simple, the book I am working on now.  You can read the entire current draft at http://thinkbayes.com.

Belly Button Biodiversity 2.0 (BBB2) is a nation-wide citizen science project with the goal of identifying bacterial species that can be found in human navels (http://bbdata.yourwildlife.org).

The project might seem whimsical, but it is part of an increasing interest in the human microbiome, the set of microorganisms that live on human skin and other surfaces that contact the environment.

In their pilot study, BBB2 researchers collected swabs from the navels of 60 volunteers, used multiplex pyrosequencing to extract and sequence fragments of 16S rDNA, then identified the species or genus the fragments came from. Each identified fragment is called a “read.”

We can use these data to answer several related questions:
These questions make up what is called the “unseen species problem.”

Lions and tigers and bears

I’ll start with a simplified version of the problem where we know that there are exactly three species. Let’s call them lions, tigers and bears. Suppose we visit a wild animal preserve and see 3 lions, 2 tigers and one bear.

To update the Dirichlet distribution, we add the number of observations to each parameter, like this:
Here data is a sequence of counts in the same order as params, so in this example, it should be the number of lions, tigers and bears.

But data can be shorter than params; in that case there are some hypothetical species that have not been observed.

Here’s code that updates dirichlet with the observed data and computes the posterior marginal distributions.
This figure shows the results. The posterior mean prevalences are 44%, 33% and 22%. 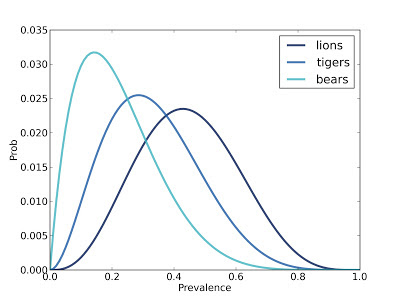 We have solved a simplified version of the problem: if we know how many species there are, we can estimate the prevalence of each.

Now let’s get back to the original problem, estimating the total number of species. To solve this problem I’ll define a metasuite, which is a Suite that contains other Suites as hypotheses. In this case, the top-level Suite contains hypotheses about the number of species; the bottom level contains hypotheses about prevalences. A multi-level model like this is called “hierarchical.”
Here’s the class definition:
__init__ takes a list of possible values for n and makes a list of Dirichlet objects.

Here’s the code that creates the top-level suite:
ns is the list of possible values for n. We have seen 3 species, so there have to be at least that many. I chose an upper bound that seemed reasonable, but we will have to check later that the probability of exceeding this bound is low. And at least initially we assume that any value in this range is equally likely.

To update a hierarchical model, you have to update all levels. Sometimes it is necessary or more efficient to update the bottom level first and work up. In this case it doesn’t matter, so I update the top level first:
Species.Update invokes Update in the parent class, then loops through the sub-hypotheses and updates them.

Now all we need is a likelihood function. As usual, Likelihood gets a hypothesis and a dataset as arguments:
hypo is a Dirichlet object; data is a sequence of observed counts. Species.Likelihood calls Dirichlet.Likelihood 1000 times and returns the total.

Otherwise we select a random set of prevalences, p, and compute the multinomial PDF, which is
pi is the prevalence of the ith species, and xi is the observed number. The first term, c(x), is the multinomial coefficient; I left it out of the computation because it is a multiplicative factor that depends only on the data, not the hypothesis, so it gets normalized away (see http://en.wikipedia.org/wiki/Multinomial_distribution).

Also, I truncated p at m, which is the number of observed species. For the unseen species, xi is 0, so pixi is 1, so we can leave them out of the product.

There are two ways to generate a random sample from a Dirichlet distribution. One is to use the marginal beta distributions, but in that case you have to select one at a time and scale the rest so they add up to 1 (see http://en.wikipedia.org/wiki/Dirichlet_distribution#Random_number_generation).

A less obvious, but faster, way is to select values from n gamma distributions, then normalize by dividing through by the total. Here’s the code:
Now we’re ready to look at some results. Here is the code that updates the top-level suite and extracts the posterior PMF of n:
To get the posterior distribution of n, DistOfN iterates through the top-level hypotheses:
This figure shows the result: 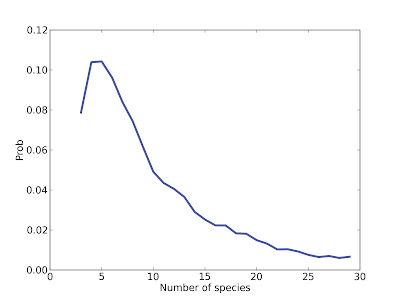 The most likely value is 5. Values from 3 to 8 are all likely; after that the probabilities drop off quickly. The probability that there are 29 species is low enough to be negligible; if we chose a higher bound, we would get the same result.

But remember that we started with a uniform prior for n. If we have background information about the number of species in the environment, we might choose a different prior.

I have to admit that I am proud of this example. The unseen species problem is not easy, and I think this solution is simple and clear, and takes surprisingly few lines of code (about 50 so far).

In Think Bayes I present a series of optimizations we need to make this solution scale. Here’s a road map of the steps:
I won't present the details here.  In the next part of this series, I will present results from the Belly Button Biodiversity project.
Posted by Allen Downey at 7:03 AM