This is part two of a series of articles about a Bayesian solution to the Unseen Species problem, applied to data from the Belly Button Biodiversity project.

Background: Belly Button Biodiversity 2.0 (BBB2) is a nation-wide citizen science project with the goal of identifying bacterial species that can be found in human navels (http://bbdata.yourwildlife.org).

To get a sense of what the data look like, consider subject B1242, whose sample of 400 reads yielded 61 species with the following counts:
There are a few dominant species that make up a substantial fraction of the whole, but many species that yielded only a single read. The number of these “singletons” suggests that there are likely to be at least a few unseen species.

In the example with lions and tigers, we assume that each animal in the preserve is equally likely to be observed. Similarly, for the belly button data, we assume that each bacterium is equally likely to yield a read.
In reality, it is possible that each step in the data-collection process might introduce consistent biases. Some species might be more likely to be picked up by a swab, or to yield identifiable amplicons. So when we talk about the prevalence of each species, we should remember this source of error.
I should also acknowledge that I am using the term “species” loosely. First, bacterial species are not well-defined. Second, some reads identify a particular species, others only identify a genus. To be more precise, I should say “operational taxonomic unit”, or OTU.
Now let’s process some of the belly button data. I defined a class called Subject to represent information about each subject in the study:
Each subject has a string code, like “B1242”, and a list of (count, species name) pairs, sorted in increasing order by count. Subject provides several methods to make it easy to these counts and species names. You can see the details in http://thinkbayes.com/species.py. 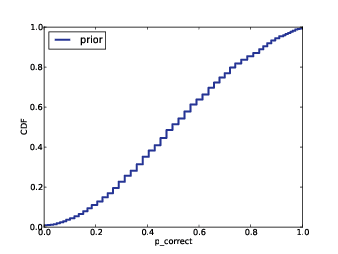 In addition, Subject.Process creates a suite, specifically a suite of type Species5, which represents the distribution of n and the prevalences after processing the data. 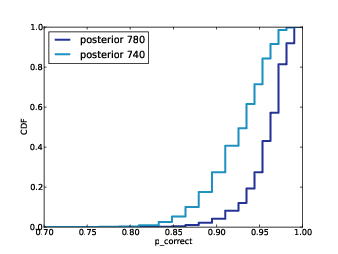 So the loop iterates through the possible values of n and their probabilities. For each value of n it gets a Beta object representing the marginal distribution for the indicated species. Remember that Beta objects contain the parameters alpha and beta; they don’t have values and probabilities like a Pmf, but they provide MakePmf which generates a discrete approximation to the continuous beta distribution.

pmfs is a MetaPmf that contains the distributions of prevalence, conditioned on n. MakeMixturecombines the MetaPmf into mix, which combines the conditional distributions into the answer, a single distribution of prevalence.
Figure 12.4 shows these distributions for the five species with the most reads. The most prevalent species accounts for 23% of the 400 reads, but since there are almost certainly unseen species, the most likely estimate for its prevalence is 20%, with 90% credible interval between 17% and 23%. 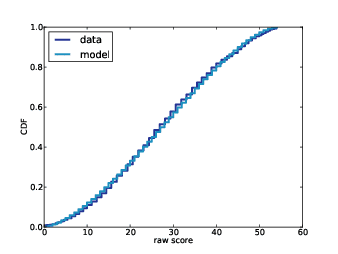 I introduced the hidden species problem in the form of four related questions. We have answered the first two by computing the posterior distribution for n and the prevalence of each species.

The other two questions are:
To answer predictive questions like this we can use the posterior distributions to simulate possible future events and compute predictive distributions for the number of species, and fraction of the total, we are likely to see.

The kernel of these simulations looks like this:
And here’s the code. RunSimulation runs a single simulation:
num_samples is the number of additional samples to simulate. m is the number of seen species, and seen is a set of strings with a unique name for each species. n is a random value from the posterior distribution, and observations is a random sequence of species names.

The result of RunSimulation is a “rarefaction curve”, represented as a list of pairs with the number of samples and the number of new species seen.
Before we see the results, let’s look at GetSeenSpecies and GenerateObservations.
GetNames returns the list of species names that appear in the data files, but for many subjects these names are not unique. So I use SpeciesGenerator to extend each name with a serial number:
Given a name like Corynebacterium, SpeciesGenerator yields Corynebacterium-1. When the list of names is exhausted, it yields names like unseen-62.

Here is GenerateObservations:
Again, num_samples is the number of additional samples to generate. n and prevalences are samples from the posterior distribution.

cdf is a Cdf object that maps species names, including the unseen, to cumulative probabilities. Using a Cdf makes it efficient to generate a random sequence of species names.
Finally, here is Species2.Sample:
And SampleConditional, which generates a sample of prevalences conditioned on n:
We saw this algorithm for generating prevalences previously in Species2.SampleLikelihood.

Figure 12.5 shows 100 simulated rarefaction curves for subject B1242. I shifted each curve by a random offset so they would not all overlap. By inspection we can estimate that after 400 more samples we are likely to find 2–6 new species. 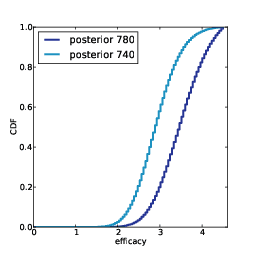 curves is a list of rarefaction curves created by RunSimulation. Each curve contains a list of pairs of k and num_new.
The resulting joint distribution is a map from each pair to its probability of occurring. Given the joint distribution, we can get the distribution of num_new conditioned on k:
i is the index of the variable whose distribution we want; j is the index of the conditional variables, and val is the value the jth variable has to have. You can think of this operation as taking vertical slices out of Figure 12.5.

Subject.MakeConditionals takes a list of ks and computes the conditional distribution of num_new for each k. The result is a list of Cdf objects.
Figure 12.6 shows the results. After 100 samples, the median predicted number of new species is 2; the 90% credible interval is 0 to 5. After 800 samples, we expect to see 3 to 12 new species. 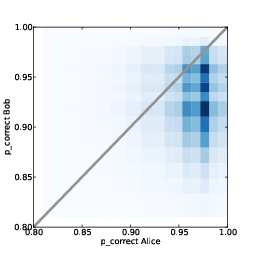 The last question we want to answer is, “How many additional reads are needed to increase the fraction of observed species to a given threshold?”

To answer this question, we’ll need a version of RunSimulation that computes the fraction of observed species rather than the number of new species.
Next we loop through each curve and make a dictionary, d, that maps from the number of additional samples, k, to a list of fracs; that is, a list of values for the coverage achieved after ksamples.
Then for each value of k we make a Cdf of fracs; this Cdf represents the distribution of coverage after k samples.

Remember that the CDF tells you the probability of falling below a given threshold, so thecomplementary CDF tells you the probability of exceeding it. Figure 12.7 shows complementary CDFs for a range of values of k.
To read this figure, select the level of coverage you want to achieve along the x-axis. As an example, choose 90%.
Now you can read up the chart to find the probability of achieving 90% coverage after k samples. For example, with 300 samples, you have about a 60% of getting 90% coverage. With 700 samples, you have a 90% chance of getting 90% coverage.
With that, we have answered the four questions that make up the unseen species problem. Next time: validation!
Posted by Allen Downey at 9:44 AM