The Price is Right Problem

This article is an excerpt from Think Bayes, a book I am working on.  The entire current draft is available from http://thinkbayes.com.  I welcome comments and suggestions.

The Price is Right Problem

On November 1, 2007, contestants named Letia and Nathaniel appeared on The Price is Right, an American game show. They competed in a game called the Showcase, where the objective is to guess the price of a showcase of prizes. The contestant who comes closest to the actual price of the showcase, without going over, wins the prizes.

Nathaniel went first. His showcase included a dishwasher, a wine cabinet, a laptop computer, and a car. He bid $26,000.

Letia’s showcase included a pinball machine, a video arcade game, a pool table, and a cruise of the Bahamas. She bid $21,500.

The actual price of Nathaniel’s showcase was $25,347. His bid was too high, so he lost.

The actual price of Letia’s showcase was $21,578. She was only off by $78, so she won her showcase and, because her bid was off by less than $250, she also won Nathaniel’s showcase.

For a Bayesian thinker, this scenario suggests several questions:
The third question demonstrates a common use of Bayesian analysis: optimization. Given a posterior distribution, we can choose the bid that maximizes the contestant’s expected return.

This problem is inspired by an example in Cameron Davidson-Pilon’s book, Bayesian Methods for Hackers.

To choose a prior distribution of prices, we can take advantage of data from previous episodes. Fortunately, fans of the show keep detailed records. When I corresponded with Mr. Davidson-Pilon about his book, he sent me data collected by Steve Gee at http://tpirsummaries.8m.com. It includes the price of each showcase from the 2011 and 2012 seasons, and the bids offered by the contestants. 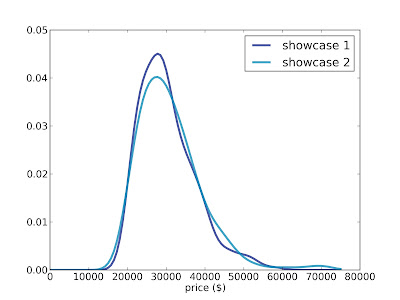 Figure 6.1 shows the distribution of prices for these showcases. The most common value for both showcases is around $28,000, but the first showcase has a second mode near $50,000, and the second showcase is occasionally worth more than $70,000.

These distributions are based on actual data, but they have been smoothed by Gaussian kernel density estimation (KDE). So before we go on, I want to take a detour to talk about probability density functions and KDE.

So far [in Think Bayes, that is] we have been working with probability mass functions, or PMFs. A PMF is a mapping from each possible value to its probability. In my implementation, a Pmf object provides a method named Prob that takes a value and returns a probability, also known as a “probability mass.”

A probability density function, or PDF, is the continuous version of a PMF, where the possible values make up a continuous range rather than a discrete set.

In mathematical notation, PDFs are usually written as functions; for example, here is the PDF of a Gaussian distribution with mean 0 and standard deviation 1:

To represent this PDF in Python, I could define a class like this:


Density takes a value, x, and returns the probability density evaluated at x.

A probability density is similar to a probability mass in one way: higher density indicates that a value is more likely.

In this book we primarily use probability densities as part of a Likelihood function. We will see an example soon.

Before we get back to The Price is Right, I want to present a more general way to represent PDFs.
thinkbayes.py provides a class named Pdf that defines two functions, Density and MakePmf:

Pdf is an abstract type, which means that it defines the interface a Pdf is supposed to have, but does not provide a complete implementation. Specifically, Pdf provides MakePmf but not Density.  [PMFs are described in Chapter 2 of Think Bayes.]

A concrete type is a class that extends an abstract parent class and provides an implementation of the missing methods.

__init__ takes mu and sigma, which are the mean and standard deviation of the distribution.
Density uses a function from scipy to evaluate the Gaussian PDF.

The Gaussian PDF is defined by a simple mathematical function, so it is easy to evaluate. And it is useful because many quantities in the real world have distributions that are approximately Gaussian.
But with real data, there is no guarantee that the PDF is Gaussian, or any other simple mathematical function. In that case we can use a data sample to estimate the PDF of the whole population.

For example, in The Price Is Right data, we have 313 prices for the first showcase. We can think of these values as a sample from the population of all possible showcase prices.

Near the middle of the distribution, we see the following values:


In the sample, no values appear between 28801 and 28867, but there is no reason to think that these values are impossible. Based on our background information, we would expect all values in this range to be equally likely. In other words, we expect the PDF to be reasonably smooth.

Kernel density estimation (KDE) is an algorithm that takes a sample of values and finds an appropriately-smooth PDF that fits the data. You can read about the details at http://en.wikipedia.org/wiki/Kernel_density_estimation.

__init__ takes a sample, converts it to a NumPy array, and computes a kernel density estimate. The result is a gaussian_kde object that provides an evaluate method.

Density takes a value, calls gaussian_kde.evaluate, and returns the resulting density.
Finally, here’s an outline of the code I used to generate Figure 6.1:

And now back to The Price is Right.

The PDFs in Figure 6.1 estimate the distribution of possible prices for each showcase. If you were a contestant on the show, you could use this distribution to quantify your prior belief about the price of the showcases (before you see the prizes).

To update these priors, you have to answer these questions:
To answer these questions, I am going to model the contestant as a price-guessing instrument with known error characteristics. In other words, when the contestant sees the prizes, he or she guesses the price of each prize—ideally without taking into consideration the fact that the prize is part of a showcase—and adds up the prices. Let’s call this total guess.

Under this model, the question we have to answer is, “If the actual price is price, what is the likelihood that the contestant’s total estimate would be guess?”

Or if we define

then we could ask, “What is the likelihood that the contestant’s estimate is off by error?”
To answer this question, we can use the historical data again. Figure 6.2 shows the cumulative distribution of diff, the difference between the contestant’s bid and the actual price of the showcase.
The definition of diff is 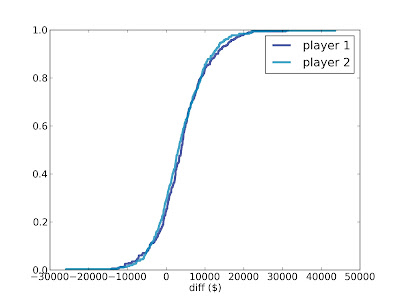 We can also use this distribution to estimate the reliability of the contestants’ guesses. This step is a little tricky because we don’t actually know the contestant’s guesses; we only know what they bid.
In Figure 6.2 we can see that the bids are biased; that is, they are more likely to be too low than too high. And that makes sense, given the rules of the game.

So we’ll have to make some assumptions. Specifically, I assume that the distribution of error is Gaussian with mean 0 and the same variance as diff.

The Player class implements this model:

pdf_price is the smoothed PDF of prices, estimated by KDE. cdf_diff is the cumulative distribution of diff, which we saw in Figure 6.2. And pdf_error is the PDF that characterizes the distribution of errors; where error = price - guess.

As an alternative, someone preparing to appear on the show could estimate their own distribution of error by watching previous shows and recording their guesses and the actual prices.

Now we are ready to write the likelihood function. As usual, I define a new class that extends thinkbayes.Suite:

pmf represents the prior distribution. The for loop copies the values and probabilities from pmf into the new Suite.

player is a Player object as described in the previous section.  And here’s Likelihood:

hypo is the hypothetical price of the showcase. data is the contestant’s best guess at the price. error is the difference, and like is the likelihood of the data, given the hypothesis.

ErrorDensity is defined in Player:
ErrorDensity works by evaluating pdf_error at the given value of error.

And therefore, a probability density is a perfectly good likelihood.

Player provides a method that takes the contestant’s guess and computes the posterior distribution:

The result is a new Pmf object, which we use to construct the prior. To construct the posterior, we make a copy of the prior and then invoke Update, which invokes Likelihood for each hypothesis, multiplies the priors by the likelihoods, and then renormalizes.

So let’s get back to the original scenario. Suppose you are Player 1 and when you see your showcase, your best guess is that the total price of the prizes is $20,000.

The following code constructs and plots your prior and posterior beliefs about the actual price:

On another level, you might find this result bizarre, because it suggests that if you think the price is $20,000, then you should believe the price is $24,000.

To resolve this apparent paradox, remember that you are combining two sources of information, historical data about past showcases and guesses about the prizes you see.

If you think of it that way, maybe it is less surprising that the most likely value in the posterior is not your original guess.

In the next installment, we'll use the posterior distribution to compute the optimal bid for each player.
Posted by Allen Downey at 11:36 AM