In order to register for the Boston Marathon, you have to run another marathon faster than the qualifying standard for your age group and gender.  For example, men 34 and under have to run 3:10 or better.  Since I am 43, my qualifying time is 3:20 -- on my 45th birthday I get another ten minutes (wrapped up with a bow).

These standards are challenging.  At most major marathons, less than 20% of the field runs a Boston qualifying time, known as a “BQ.”  According to marathonguide.com, the races in 2010 with the highest percentage of qualifiers were the Bay State Marathon (37%) and Boston itself (44%).

Two years ago I ran the Bay State Marathon in my first (unsuccessful) attempt to qualify.  I was almost on pace for the first 20 miles, then hit the wall and slowed from 7:50 per mile to 10:00.  While I shuffling through the last few miles, I wondered whether the Boston qualifying times have a visible effect on the distribution of finish times.

To look for these effects, I collected data from the 2010 Bay State Marathon (available at coolrunning.com).  For each of the 1564 finishers, I looked up their age and gender to get qualifying times, and computed the difference in minutes between their actual and qualifying times.

For comparison, I also collected data from the 2010 Sun Lowell Half Marathon, which runs on (mostly) the same course at the same time.  For each half-marathoner, I computed a marathon time prediction using the well-known Riegel formula.

The following figure shows the PMF of finish time, relative to qualifying time, for runners in both races whose finish time (real or imagined) was within 60 minutes of their qualifying time.  A negative difference means the runner qualified. 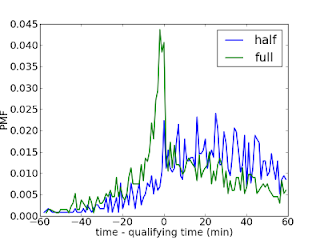 As expected, there is a substantial mode just under the qualifying time for the marathoners, but not for the half marathoners.  The other two hypothetical effects are not apparent.

PMFs tend to be noisy, so I generally prefer to look at CDFs: 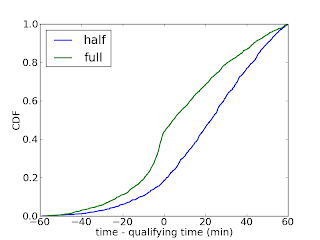 Again, the BQ effect is clear: in the full marathon there are more runners just under the qualifying time and fewer just over.  But either the number of people who bonk is small, or their times are sufficiently spread out that they don’t constitute an apparent mode.  I am a mode of one.

If you find this sort of thing interesting, you might like my free statistics textbook, Think Stats. You can download it or read it at thinkstats.com.
Posted by Allen Downey at 6:55 AM