Among runners, there has been a lot of discussion of the effect these changes will have on the demographics of the race, especially the proportion of women and older runners.

To answer this question, we have to get a sense of what the pool of potential qualifiers looks like.  I collected data from the 2008, 2009 and 2010 Chicago Marathons (don’t ask me how).  This dataset includes 101135 finish times with the gender and age of each runner.  To keep things simple, I treat each finish time as a different runner, even though many people ran the race in more than one of the years I looked at.

For each finish time, I computed the difference between the actual time and the standard (3:10 for men, 3:40 for women).  This figure shows the distribution of those differences: 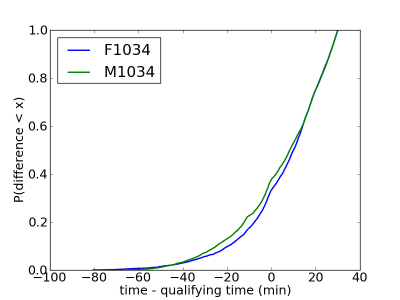 The BQ Effect, which I wrote about last week, is apparent for men and women.  For the men there is another mode 10 minutes below the standard, which happens to be 3:00:00.  Apparently the only thing more important than qualifying for Boston is breaking 3 hours.

The runners in this dataset are a sample of the population that constitutes the field at Boston.  If we assume that this sample is representative, we can use it to predict the effect of the changes in the qualifying standard.

The new registration process might make the effect even more dramatic.  If the field fills before the last group has a chance, the standard is effectively tougher by 11 minutes.  That disqualifies 41.6% of men, 50.5% of women, and displaces 395 women.

Is that fair?  I will argue that it is not, but it will take some time to make the argument clear.  Let me start by explaining why some people think it’s fair.  It is conventional wisdom that the current standard is relatively easy for women.  If that’s true, then these changes will be a correction.

For example, in this article Amby Burfoot proposes a standard based on the age-graded tables created by World Masters Athletics (WMA).  Under that standard, the qualifying times would be 3:12 for men and 3:30 for women.  In the Chicago sample, that would increase the number of men by 8% and decrease the number of women by 47%.  Extrapolating to Boston, it would replace 1751 women with men, yielding a field of 66% men.

I think this standard is unreasonable because the WMA tables are based on world records in each group, not the performance of more typical qualifiers.  The proposed standard has a bigger effect on women because the elite females are farther from the pack than the elite males.

To see the the tail of the distribution, let’s zoom in on the runners in the Chicago sample who beat the standard by 30 minutes or more: 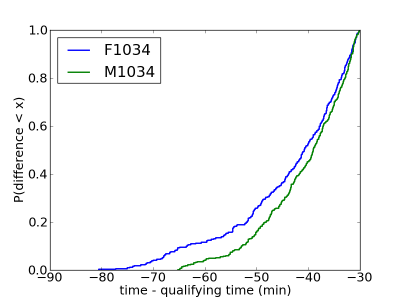 The tail for women extends farther to the left.  The fastest men beat the standard by 65 minutes; the fastest women beat it by more than 80 minutes.  But the existence of a small number of outliers should not have such a drastic effect on the qualifying standard.

1) The changes in the qualifying standard and process might decrease the representation of women in Boston from 52% to 48%.

2) The common belief that the standard is relatively easy for women is based on the performance of a small number of outliers.  The gender gap for near-qualifiers is much larger than the gap for elites.

3) Implementing the standard proposed by Runners’ World would decrease the percentage of women in the open division at Boston to 33%.

1) I will evaluate possible definitions of a “fair” standard and compute qualifying times for each definition.

2) I will extend this analysis to the other age groups. 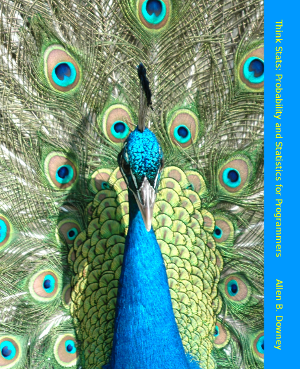 If you find this sort of thing interesting, you might like my free statistics textbook, Think Stats. You can download it or read it at thinkstats.com.
Posted by Allen Downey at 11:04 AM