Are first babies more likely to be late?


When my wife and I were expecting our first child, we heard from several people that first babies tend to be late.  If you Google this question, you will find plenty of discussion.  Some people claim it's true, others say it's a myth, and some people say it's the other way around: first babies come early.

What you will probably not find is any data to support these claims.  Except this kind of data:


``My two friends that have given birth recently to their first babies, BOTH went almost 2 weeks overdue before going into labour or being induced.''


``I don't think that can be true because my sister was my mother's first and she was early, as with many of my cousins.''

If you don’t find those arguments compelling, you might be interested in the National Survey of Family Growth (NSFG), a survey conducted by the U.S. Centers for Disease Control and Prevention (CDC) to gather ``information on family life, marriage and divorce, pregnancy, infertility, use of contraception, and men's and women's health.”

Their 2002 dataset includes 7643 women, who reported the gestational age for their 9148 live births.  This figure shows the distribution of pregnancy length: 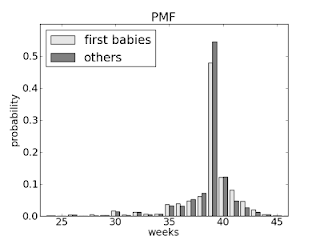 The distributions are similar for first babies and others.  The mode is 39 weeks; the distribution is skewed to the left, with some births as early as 24 weeks, but almost none later than 44 weeks.

On average, first babies are 0.078 weeks later than others.  This difference, 13 hours, is not statistically significant.  But there are differences in the shape of the distribution.  This figure shows the percent difference between first babies and others for weeks 34 through 46: 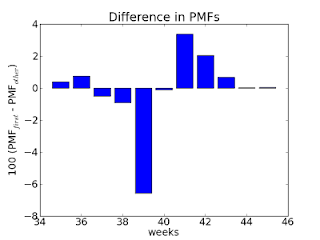 So far, none of this is useful for planning, so let’s consider a scenario: suppose you are in week 38 and you want to know your chances of delivering during the next three weeks.  For first babies, the chance is 81%, for others it is 89%.  So yes, in this scenario, first babies are more likely to be late.  Sorry.


UPDATE: November 2011. Are first babies more likely to be light?


If you find this sort of thing interesting, you might like my free statistics textbook, Think Stats. You can download it or read it at thinkstats.com.
Posted by Allen Downey at 6:52 AM